Caution: This blog post is about triggers and talks about some major abandonment issues.

Our household has been a bit stressful lately. We decided to adopt a second cat to keep our first cat company while we are at work and just so that he would have a playmate. Unfortunately, our resident cat is being very rough with our new, sweet, gentle cat, biting his throat and making him cry.

The situation, and my significant other’s response to it, has set off some major triggers for me. Triggers are situations that cause you to experience your own trauma again. They are very personal, and anything can be a trigger for anyone. 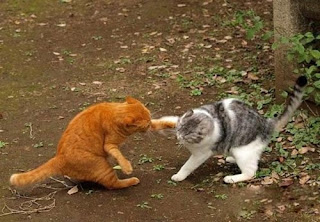 The reason that this particular situation is troubling to me is because when I was in my early teens, my mother decided that it was too difficult to deal with my behavior and voluntarily gave me over to social services. While I forgive her now, many years later, and many apologies later, I’ll never forget the look on her face when she dropped me off and said, “Take her. I don’t want her.” It hurt so much. I tried to look brave and tough, but it must have been written all over my 13 year old face that I was devastated, embarrassed, and afraid. She was warned that if she left without talking it out with a counselor, she would be charged with child abandonment.

She stayed, talked to a counselor, and then she left with my sister and grandmother. My sister told me years later that she was scared into submission to my Mom, afraid that she too would be “given away.” While I choose to do my best to move on and forgive, I don’t know if I will ever forget the hurt, rejection, and humiliation of that moment when my Mom left me there.

The trigger for me this week was that my significant other repeatedly said, “We need to get rid of Smokey” (our resident cat) “He’s got to go.”  My heart sunk. How could anyone turn like that on the cat we’ve had for a year? Yes, the cat has always been a little standoffish, but this has been his home. We rescued him and gave him the life of Riley. Then, we thought we were doing something nice by bringing in a friend, but Smokey feels threatened and jealous and is acting out. I agree that the level of aggression that he shows toward our new cat, Piper, is too much, but I want to try any and everything before giving up on Smokey and making him leave.  I feel like all of my garbage from when I was 13 is being kicked up as I think about how sad it would be if Smokey ended up in a cage at the Humane Society. How scared the poor thing would be. I would probably wonder about him for the rest of my life. I don’t want to give up on Smokey.

In all fairness to my significant other, I can understand why he has reached this level of frustration. I know he loves Smokey, but he is VERY concerned about Piper (as am I), who came to us with known medical problems and who should not be stressed. My SO has been experiencing insomnia because he worries so much about Piper getting hurt, so he keeps checking on him. He is a major cat lover, and it breaks his heart that he thinks one of the cats has to go, and that if he had to pick, he would pick Smokey. He has loved Smokey so much. They’ve been inseparable. But, losing sleep night after night while monitoring the two cats together or hearing them cry and scratch at the door if separated have taken their toll.

I called our vet today and asked what else can be tried. Perhaps a mild tranquilizer to help Smokey deal with the stress of the changes?  I’ll let you know what happens.

As you can probably tell, something that happened for me is that I really identified with the cat.  I transfered all of my stuff onto the cat, and I re-lived my pain from years ago. It has affected my appetite big time. I’m going to hypnosis on Monday (which always helps with this), and I will give you an update on how it goes.   I feel so scared though – the part of me that is afraid I will be abandoned (my inner child) is on red alert.

Please keep both kitties and my SO and I in your good thoughts as we figure out what’s best for everyone.

Encouraging Those With BPD & AnxietyAnxiety, Lack of Appetite, and Wise Mind
Scroll to top