Some interesting insights tonight as well as some big question marks.   Netflix recommended a television series to me called “United States of Tara.” In it, Australian actress Toni Colette brilliantly plays a woman who is diagnosed with Dissociative Identity Disorder (DID), formerly known as Multiple Personality Disorder. While this disorder is quite different from Borderline Personality Disorder (BPD), which is my diagnosis, watching a few episodes has me thinking about times when I, as a person with BPD, shift into different parts of myself. 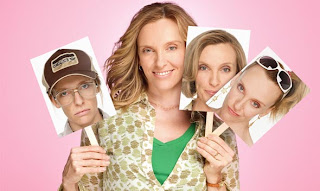 While Toni’s character, Tara, is portrayed as someone who completely dissociates (disconnects from herself) and whose body is taken over by a number of unique personalities (one of them is even left-handed, and she and all of her other personalities, or “alters,”are all right-handed), when I experience a shift in my sense of self, they are all “parts of me.” For example, there is “Little Girl Me.” I haven’t experienced feeling like and behaving like her in quite some time.  Up until about 8 months ago, she showed up pretty much daily.

Little girl me likes to talk in a cute, childlike voice, stomp and pout when she doesn’t get her way, and she uses her charm and cuteness appeal to, most of the time, get her way. It’s a mix of conscious and subconscious efforts, but unlike Tara, I remember everything that happens. Also, the main person this side shows up around is my boyfriend. There is a variation of her, “The Child Me,” who has shown up when I was desperately afraid of being alone or abandoned. This part would show up at the crisis clinic begging to be admitted or for someone to take care of her in some way. She would also show up at the emergency room.  In retrospect, this part of me would have a shift in body language and tone of voice, and I would even dress a bit younger – all to elicit help and rescuing from “real” adults.  I didn’t completely realize it when I was doing it, and again, I didn’t feel like I was someone else – just me, younger. Perhaps this is regression?

Usually, during the episodes, I’d have some awareness that I wasn’t behaving like a “normal” adult. Sometimes my boyfriend would say, “How old are you?” and I remember that I would stand there, feel confused for a little bit, and then I would literally need to count my age up from around 6 years old all the way up to my current age. I didn’t really know what “grounding” was, but this seems as if it were an innate knowing.

Little Girl Me and Child Me have caused some drama in my life as well. For example, when it came to intimacy with my boyfriend, because I was Little Girl Me so often, he didn’t want to be romantic with me, as he said he felt “wrong” about it – as if he were taking advantage.

The more I think about it, the more amazing it is that I’ve been slowly letting that part of me go. The more I’ve come to realize that I am responsible for myself, my behavior, and the way I treat others no matter what mood I’m in or what “part of me”shows up, the more I’ve realized the value of grounding and using DBT (Dialectical Behavior Therapy)skills.

As a result, I’ve been more present, more accepting of the now, and more accepting of the fact that I can’t go back in time and change the past. I think a part of me thought that if I desperately clung to behaving and being like a child, I could somehow undo the pain and difficulties that I had when I actually was a child. I think part of me thought that this was the only way to get my needs met and to get others to rescue me. This is the part that was very unconscious. I didn’t realize that this was my motive.  I just know that a day or two after some big crisis that I’d created, the Adult Me (true self?) would come on board, feel embarrassed and ashamed for my childlike behavior, and I’d apologize to people – only to have the cycle repeat itself again and again.

Wow. I’ve been living as my authentic self more and more. That’s kind of exciting. That’s not to say that the other parts of me aren’t there or never come on board, but it’s so rare. I’m much more in control now, have less crises and have been getting more comfortable in my own skin.  I never thought this would be possible.

Thank you for reading.
More Soon.

UPDATE: Learn the skills that helped me ultimately overcome these behaviors. I teach an online class where I share everything I learned to help me overcome borderline personality disorder and learn to love myself, be myself, and be in healthy relationships with others. Check out DBT Path for emotionally sensitive people today!