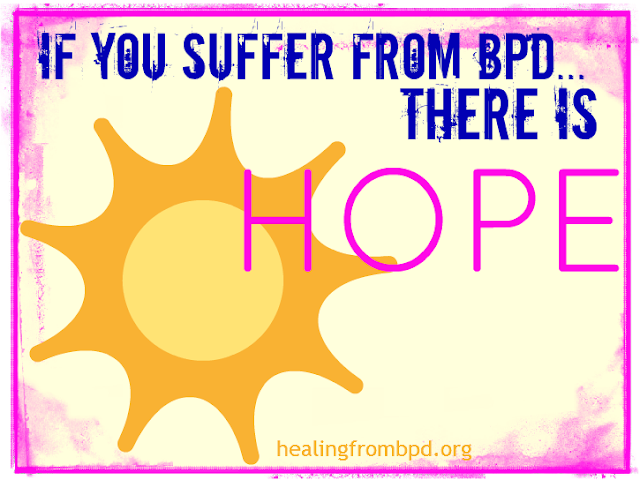 Yesterday was pretty intense, and I’ve been thinking about how to share the situation with you in a way that would be encouraging to you. If you’re suffering from Borderline Personality Disorder and can’t even imagine getting well, let alone being able to return to the site of a trigger to help someone else while not getting triggered yourself, read on. May this encourage you that there truly is hope!

A friend of mine has been suffering mentally. She doesn’t have BPD (Borderline Personality Disorder) like I do,  but OCD (Obsessive Compulsive Disorder), Generalized Anxiety, and Depression.  I have shared all of these diagnoses at one time or another.  Her eating and sleep have been disrupted, and she’s been carrying on for months in a panic state, nearly all day every day.

Finally, yesterday, she made some comments to her therapist (I won’t repeat them here, but they were specific self-harm threats), and, as is the law in the United States, he was obligated to put  her on what is called a “72 hour psychiatric hold.”  This means that she would need to go to the emergency room to be medically cleared, and once a bed became available, she would be transferred to a psychiatric hospital to keep her safe. She would also be evaluated.

When I got the call yesterday that she was in the emergency room, interestingly, I did not panic.  For those who have been following my blogs for a while, you know that showing up at the emergency room for a psychiatric crisis was a routine thing for me – at least a couple of times a year. This past June was my one year anniversary of not doing that.

At my one year anniversary, even though I was proud and excited that through DBT (Dialectical Behavior Therapy) I have found new skills and ways to cope, I was nervous that if I celebrated, I would soon find myself back there, embarrassed that I had shared my accomplishment.  Through some work with my hypnotherapist, I was able to get rid of the scary images and thoughts that I had associated with the emergency room and was able to begin seeing it as a place that provides services for people who really need it.

Yesterday was a testimony to the success of my hypnosis session, as I was able to visit my friend in this room – the very same room I had often been put in for psychiatric observation, yet I was not triggered. I was able to be fully present with my friend, not making it at all about me, but all about her. I actually recognized the nurse who was overseeing her. I think she recognized me, too, but of course, we didn’t utter a word about it. 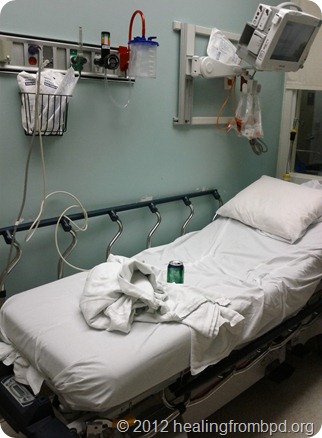 I stayed with my friend for a couple of hours.  I listened with compassion, love, and non-judgment.  She was very tearful and panicky when I arrived, but I noticed her becoming more grounded and calm as we talked and even laughed a bit.  I held her hand. I hugged her. I told her I loved her.

When she freaked out and told me she worried that she was burdening me and that I must really want to leave, I told her that I had been through this before, I understand her suffering, and that my ability to be compassionate toward her was limitless. There was nothing she could do to push me away. I would not leave or abandon her.

I encouraged her to take the Ativan that the doctor was offering, and as it kicked in, I suggested she lay back on the hospital cot while I guided her in meditation. She was happy to do so. When the nurse noticed what we were doing, she walked in slowly, smiled, and turned off the lights for us.

My friend eventually drifted off into a light slumber, but not before saying, “It’s okay, Debbie. I’m going to rest now. You can go home, and I’ll call you in the morning.”

I went out to the security guard who was watching over her (another requirement in the U.S. when you are on a psychiatric hold), and I explained that she seemed to be doing better, that we had meditated, and that she was off to sleep. I let him know that my phone number was in her purse, should she need me.

I left the hospital, and as I did, I looked around at the sites and sounds that had once been so scary for me. I thought about the transformation that has taken place within that allowed me to be back in that place, this time on the other side of the fence, supporting, encouraging, and loving someone else through the very same kind of suffering I had experienced so many times.  I really would not have believed it was possible if you told me a year ago that this would be the case.

If you have Borderline Personality Disorder or any other mental illness, keep hope! If you work hard, don’t give up, and practice the skills that you learn through therapy (in my case, DBT skills), your entire life can be transformed. Meaning can be given to your suffering as you are able to eventually feel safe and free enough to not only enjoy your life but also to help others.

Oops! I did it again… Impulsiveness and Regret in BPDGoodbye Norma Jean | Did Marilyn Monroe have Borderline Personality Disorde...
Scroll to top