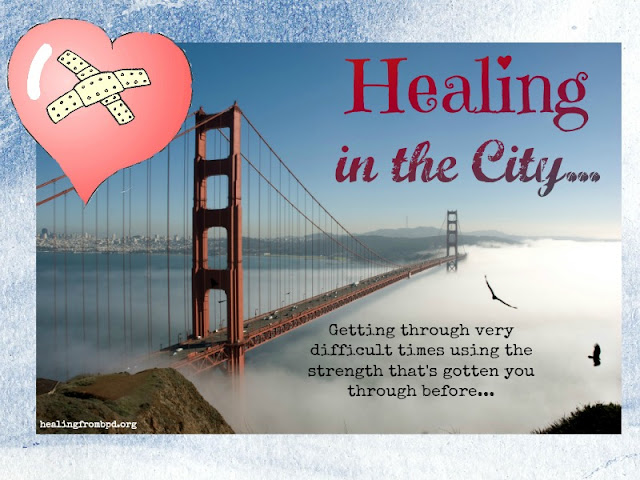 Sometimes we have to do things that terrify us. We have to show up for meetings or other appointments that we’d rather altogether avoid. Sometimes, as was the case for me yesterday, avoidance would cause more harm than actually showing up and dealing with the issue at hand. So, as anxious as I was (anxiety attacks, trouble falling asleep, kept waking up, low appetite) at the time, especially the days leading up to the meeting yesterday, I got up early in the morning and headed out with my significant other (SO) to the city.
Yesterday also happened to be both Halloween and the day of the celebratory parade for the San Francisco Giants’ World Series baseball win.  We had to leave home extra early since several streets we would need to navigate would be completely blocked off. We got up at 4:45 in the morning, and the meeting didn’t start until 10:30.
I was so anxious. Even though I didn’t feel like it, I used self-care (DBT “PLEASE” skills to be sure to eat something nourishing).  I had this whole wheat bagel with lite cream cheese and some apple juice. Good brain food for a morning when I’d really need my brain working tip top. 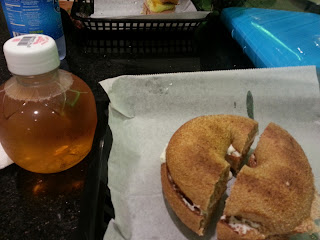 I ate most of it and carried around my juice until I finished it.
Anxiety was sky high.  At first, I was complaining that the parade just had to land on the day I needed to be at this meeting, but then, I began to see it as a gift.  As early as 6:00 am, Giants fans from all over began to line the streets as the police put up barricades to set off the path for the parade that would come 5 hours later. The energy all around me was so positive. Had it been an ordinary day, the dark, misty, drizzly streets of San Francisco might have felt lonely in that area of town, but instead, it was lined with people of all ages and backgrounds, dressed in their sports gear, smiling, and in a great mood.
People were excited and pumped. They, too, had gotten up extraordinarily early, and I imagined that they were experiencing similar symptoms as me, but they were interpreting it as excitement.  The symptoms of anxiety and excitement are very close.
My SO and I decided to walk around. I acknowledged that the presence of the parade preparation and the gathering of thousands of people truly was a gift. I imagined absorbing and becoming part of all of the positive energy around me and releasing the negative energy to far, far away. It seemed to help. We chit chatted with some families, got really close to the fence and thought about what a good view we would have had if the parade had been our true destination that morning.
We took photos. This is of the clock tower at AT&T Park with the Champions banner on it. 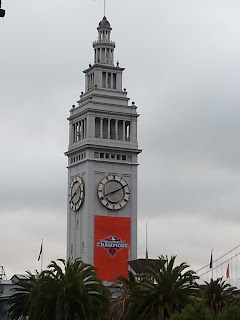 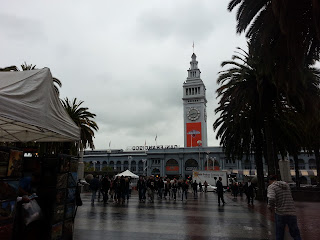 Here is some of the crowd and the television news station vans that were showing up. 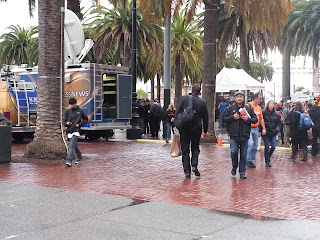 More crowds lining the streets as the sun began to come up. 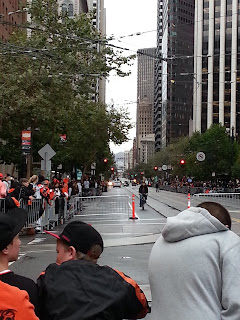 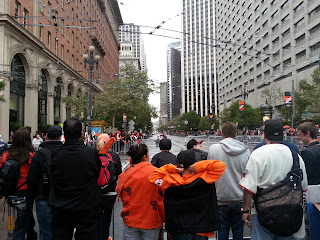 Not before long, it was time to head to the meeting. This was the room we sat in from 10:30 in the morning until 10:30 pm. What a long day, indeed.
I did feel that it was such a blessing that the room had a spectacular view of the bay by Piers 1 and 3, and off to my left was a view of Coit Tower and Alcatraz. I got to use the DBT skills of soothing through vision and also distracting with the same. I often got up, took deep breaths, and looked out these floor to ceiling windows. It helped a lot. 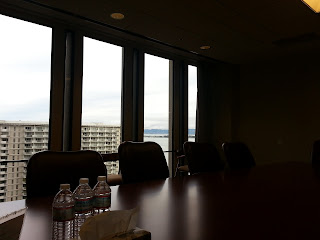 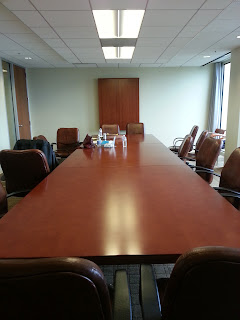 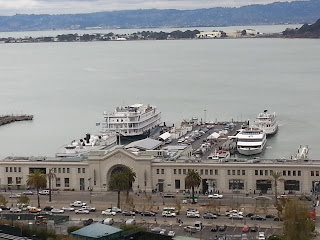 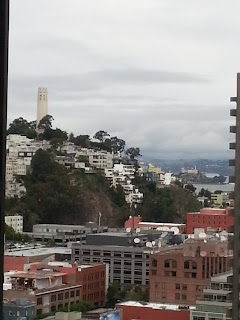 They brought in lunch. Other than that, they offered tons of snacks and beverages to keep us going through the day and into the night. I haven’t had “Goldfish” crackers probably since I was a little girl. Perhaps that’s why I was so drawn to them for comfort. I self-soothed through taste. Since we didn’t have a formal dinner, another bag became part of my evening snacking, too. Something about crunching on them, tasting the salt, and the cute packaging all comforted me, even if just a little bit. (Sometimes it really is the “little things,” isn’t it?) 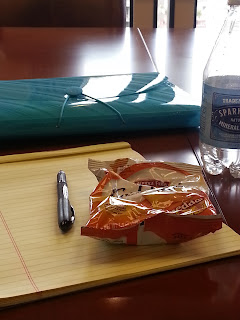 The meeting carried on and on and on.   Although I was incredibly relieved to find out I would NOT have to talk about details of past abuse, it was still intense and stressful. On breaks, my SO and I would use the free wifi to distract with an episode of Seinfeld to help reduce stress and get us to laugh a bit.  This really helped. 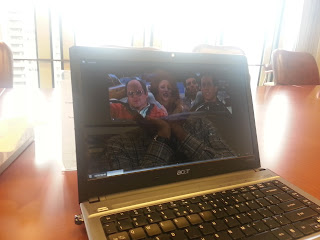 Triggering words were sometimes uttered by others, and I would panic. My SO and other support at the meeting comforted me and helped me through. I also watched from the window as the beauty of the landscape around me radically changing as the sun went down. 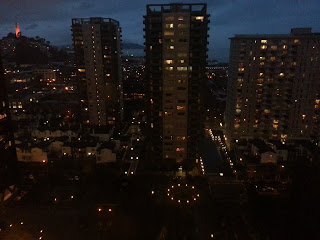 While I can’t share the details of what happened, I did give this update via Twit Longer today.
I didn’t get a ton of sleep and felt emotionally and physically exhausted from the moment I left the meeting and into this morning. Fortunately, these two babies were willing to snuggle up and nap with me this morning and into the afternoon.  I soothed by touching their super soft fur and feeling them close to me as we snuggled with the soft blankets. 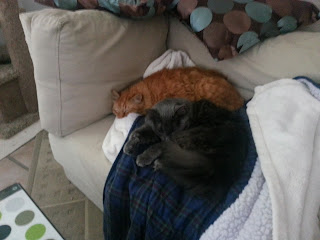 A few more things about yesterday:
Please do not forget how strong you are. No matter what you are going through, it can’t last forever. You have overcome before, and you will overcome again.
Thank you for reading.
More Soon.