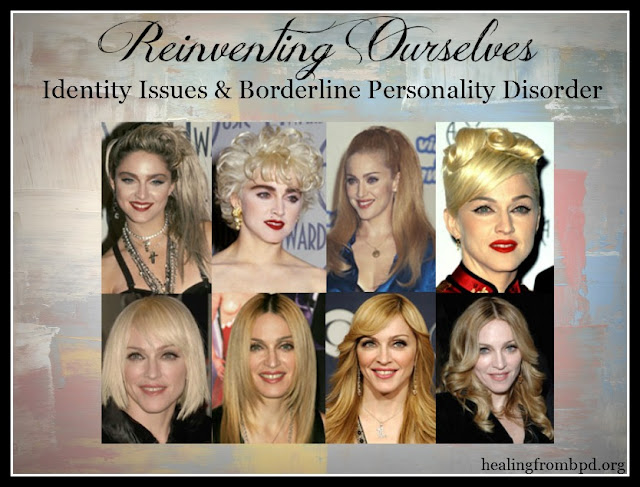 When I was a little girl I witnessed one of my idols, Madonna, from album to album, undergo metamorphosis. She would change her entire look and vibe, and the press would say she had yet again “reinvented” herself. This thought always appealed to me, and as someone with Borderline Personality Disorder who has dealt with an elusive sense of self-image and identity, I’ve tried to do this many times — to reinvent myself.

For example, in my twenties, I changed my name. I’ve gone by so many different first names over the years because I never felt like I identified with “Debbie.” (Sometimes I still don’t.) I’d pick names that felt good at the moment. Names that I thought others would think we’re cool or pretty. I’d eventually either bore of the new name or become distressed and distraught, feeling like I’d only further separated myself from the possibility of connecting with the truth of who I really was. So, I’d rather reluctantly go back to being called Debbie.

I’ve radically changed my hairstyles over the years only to eventually find that a short pixie is what truly makes me feel like “me,” whoever she may be. At least that’s a start.

I’ve tried different styles of clothing only discover that while there’s a part of me that is desperate to be perceived as cool and edgy, I’m more of a classic Ann Taylor Loft girl on my dress-up days and an Old Navy sweats and hoodie girl most others. There’s another part of me where I’ve managed to find a piece of authenticity: the way I dress. I’ll occasionally stray, but if I stray too far, it feels uncomfortable and awkward. I suppose this is normal for most people.

I used to fantasize that I would just move to a place where nobody knew me. I’d show up and be whoever I wanted. The girl with no past and a fresh slate. I could have them call me whatever I chose and create any image I wanted to project. I actually tried this a couple of times prior to being diagnosed as BPD.

I eventually learned that no matter how we dress, style our hair, where we live, or what we ask people to call us, we’ll keep repeating the same dysfunctional and destructive behaviors we always have until we are willing to make a deep and honest attempt to find out who we really are in light of, despite of, and because of the lives we’ve lived up until this point in time.

I’ve been in DBT for almost two and a half years now. One of my major concerns that I had when I entered the program was whether it could be a help in me figure out who I was. It certainly has helped me get off to a good start. I’ve learned that I am not my emotions, nor am I at the mercy of them or a victim of them.

I’ve learned more effective ways to cope with distress so that I don’t sabotage the progress I’ve made so far. I’ve learned ways of connecting and communicating with others that takes their perspective and needs into account rather than just my own. I have a long way to go in the area of relationships — especially maintaining friendships, but it no longer seems impossible. It turns out that who I am at the core is someone who is pretty likable. I need to continue to believe that, to discover her, and let her emerge. I also need to create safety for so that I can learn to maintain those relationships despite having failed miserably at doing so in the past.

I continue to work on connecting with my own evolving identity. After all, how can we be in healthy relationships with others until we have a sense of who we are as individuals?

Perhaps I am undergoing or undertaking a self reinvention of sorts at present, but I’m proud to say, it’s a conscious one. It’s not about trying to figure out who I need to be in order to please someone else or to create an image that isn’t really me to attract attention or change my life on a superficial level. It’s about discovering, accepting, and loving who I really am and letting that woman shine, one day at a time.

It’s All In Your Head: Mirror Neurons and Borderline Personality Diso...The Four Agreements: Toltec Wisdom for the Emotionally Wounded
Scroll to top