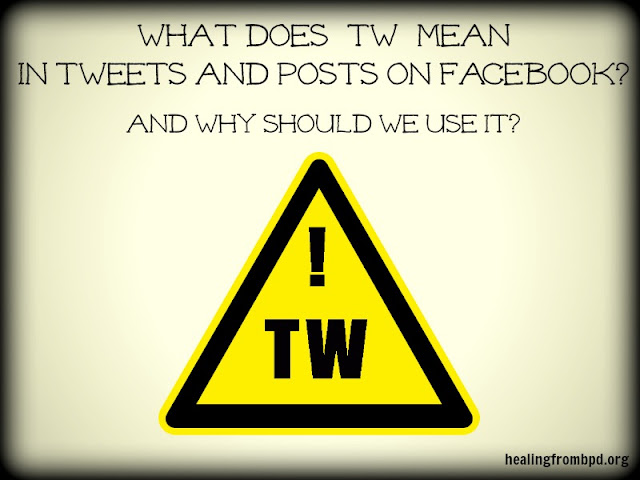 You may have come across tweets on Twitter or posts on Facebook that start out with the letters “TW.” What does this stand for, and why should you consider using it?

What does “TW” mean?
TW means “trigger warning.” It is a courtesy extended to others who may view your content on social media when your post is potentially an emotional trigger.
Geek Feminism Wiki describes trigger warnings as:
“Trigger warnings are…designed to prevent people who have an extremely strong and damaging emotional response (for example, post-traumatic flashbacks or urges to harm themselves) to certain subjects from encountering them unaware. Having these responses is called “being triggered.”
The Urban Dictionary describes it as:
“Used to alert people when an internet post, book, article, picture, video, audio clip, or some other media could potentially cause extremely negative reactions (such as post-traumatic flashbacks or self-harm) due to its content. Sometimes abbreviated as “TW.”
Psychotherapist Alicia Paz, M.A., LLC mentions the use of TW in tweets in this way:
“Although the DSM IV-r criteria for Borderline Personality Disorder does not include trauma, it is often a common thread in those with the disorder.  Often on Twitter I see a tweet started with “TW” (trigger warning) before something that may be triggering, it’s a safety boundary for many in the BPD community.  In DBT we strictly enforce the rules about saying things that can be triggers, sometimes those who don’t have BPD don’t realize how harmful what they say can be, sometimes people try to stir up some drama and some are so disconnected from their trauma they don’t understand how someone could be hurt by what they are saying.”
The Challenges of Using TW:
We’ve all come across that tweet that made us feel a sudden flood of anxiety or disbelief. We wish we had never read it, as we now feel emotionally affected by it. Wouldn’t it be nice if there were a code for warning others that our post may be upsetting so that they have the choice to read on or pass it over if they are feeling particularly vulnerable? There is.
By putting the letters TW at the beginning of your tweet or post and spreading awareness as to what this means, we help create a safer, more courteous space to connect with others who may be suffering.
There are some challenges around using TW, of course, and they include but are not limited to:
What to do if you consistently see posts/tweets without TW that trigger you:
Many people on Twitter and Facebook, like us,  have mental illness and go through periods of suffering. They may sometimes post things on the above list without a TW. If it becomes too much for me, I unfollow them (usually not permanently — I just take a break. I’ve recently been particularly sensitive and vulnerable due to strong PTSD symptoms).
I also let the person know why I’ve unfollowed. It’s a matter of self-care. It’s nothing personal or done to hurt or upset anyone else.  Sometimes I just step away from social media for a while to soothe and then return later.
It’s up to you how you handle these situations. We can’t control anyone else’s behavior. I tend to be a Mother Hen, and with the best of intentions try to nudge people into considering using TW, but this is not always well received. I have to accept that.  Nothing anyone does is about us. It is about them, and each person as at their own point on their particular journey.  We can’t force people to understand or compromise. It’s up to them to decide how they will behave in a community setting.
Your Thoughts?
What are your thoughts? Do you agree with my list of suggested TW topics? What would you add or take way from the list, and why? What do you do when you come across a triggering tweet or post? What do you do to warn others when your content may be triggering?
Thank you for reading.
More Soon.
November 21, 2012/16 Comments/by Debbie (author)
https://www.my-borderline-personality-disorder.com/wp-content/uploads/2018/12/healing-from-bpd-e1577900769964.jpg 0 0 Debbie (author) https://www.my-borderline-personality-disorder.com/wp-content/uploads/2018/12/healing-from-bpd-e1577900769964.jpg Debbie (author)2012-11-21 18:25:002012-11-21 18:25:00What does “TW” Mean, and Why Should You Use It?
16 replies

The Four Agreements: Toltec Wisdom for the Emotionally WoundedPaying Forward The Compassion You’ve Received – Empathy and BPD
Scroll to top