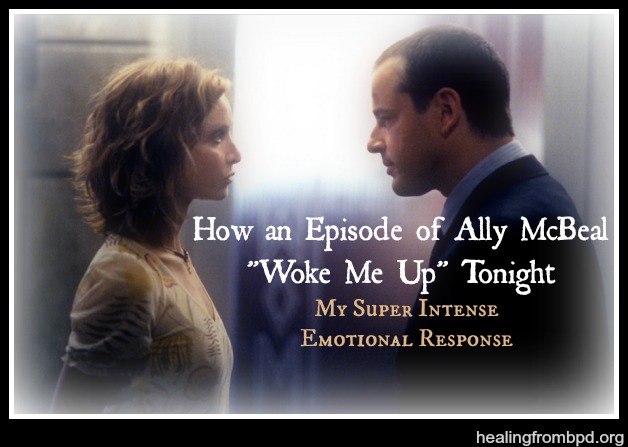 I was just so deeply, emotionally moved and brought to tears that I had to start writing while the experience was still fresh.  We all know that television shows are works of fiction, but most of us also know that if you bring together some magic ingredients like great acting, characters you love, and dramatic moments that all of humanity can relate to, the recipe is ripe for an emotional experience. This is what happened for me tonight.

A couple of months ago, Netflix’s clever recommendation system thought that I might enjoy a show from the nineties called Ally McBeal, and it made the suggestion. I’ve been hooked since the first episode. Maybe it’s the quirky lead Ally and her fellow attorney John, “the Biscuit,” who I most identify with and adore. But I also grew fond of the character Billy.   At first, his character didn’t have much depth for me, and I was confused as to why he was such a deep object of affection for so many of the female characters in the show.
In recent episodes, his behavior had grown to be erratic and irritating. He behaved like a male chauvinist pig, and while I appreciated that the show’s writers finally gave his character more dimension, the emotions I had toward him were disgust, judgment, and dislike.
If you’re just getting to know the show on Netflix like me, Spoiler Alert!
Well, it turns out that Billy actually had a brain tumor, and that’s what was causing his erratic behavior.  At first they thought it was benign, but within just a couple of episodes, the hallucinations he was experiencing became more frequent and severe, and he suddenly passed away.  I couldn’t believe it. I thought perhaps another character was having a nightmare and would wake up. But, as when something tragic happens in real life, this was no nightmare. Perhaps the shock of the sudden loss of this character tugged at my heart because it reminded me of how realistic it is for any one we love, or even us, to suddenly be gone. Life is so fragile.
It also reminded me of how unfair I can be with my judgments. We never really know what is going on with a person.  Even if someone is acting like a total ass, while it may not be a brain tumor in most cases, we might never know the pain, hurt, and trauma that led up to the exterior demonstrations that they allow us to see.  We may never know the hurt deep within their heart.  I pray that I can grow in compassion and reduce the judgments I have of others (and of myself). I tend to be critical when I would like to be more compassionate and loving. Who am I to judge?!
I pray that the sentiment that is heavy on my heart after this episode — the reality that we need to cherish, love, and treat well those people in our lives that we care about, right here and right now — STAYS with me long beyond tonight.
Some lessons I learned or had re-awakened tonight from watching this episode of Ally McBeal:
Thank you for reading.
More soon.
December 13, 2012/2 Comments/by Debbie (author)
https://www.my-borderline-personality-disorder.com/wp-content/uploads/2018/12/healing-from-bpd-e1577900769964.jpg 0 0 Debbie (author) https://www.my-borderline-personality-disorder.com/wp-content/uploads/2018/12/healing-from-bpd-e1577900769964.jpg Debbie (author)2012-12-13 07:30:002012-12-13 07:30:00How An Episode of Ally McBeal Woke Me Up Tonight
2 replies

Guilt Vs. Shame | Understanding Emotions: What is the difference between Guilt...Triggered by Tragedy in Connecticut
Scroll to top