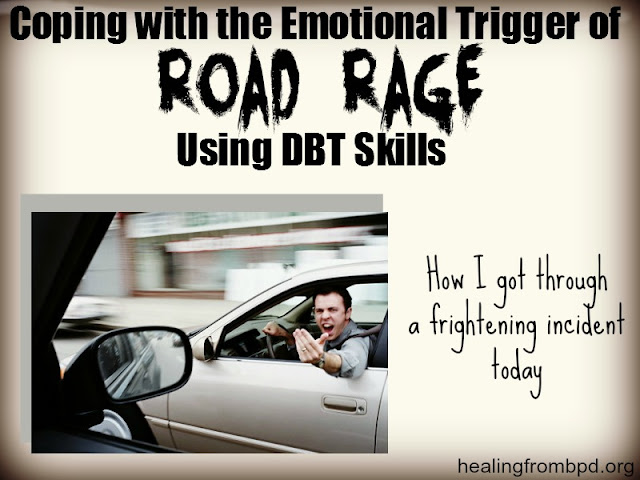 I experienced something very scary today that shook me to the core and got my nervous system triggered.  Have you ever been involved in road rage?  Whether you’ve been the “villain” or the “victim” of this heinous behavior (and, I’ve been both more than once), you know how terrible you are left feeling after the incident.

Today, as I was driving along, a car that was behind me cut me off and was barely moving once in front of me.  The rest of what happened was so automatic that I was only able to process it moments later when I pulled over.
Although I could have moved to the next lane, I stayed behind the vehicle and had some thoughts/interpretations about what had just happened/was happening:
These thoughts came so quickly, and I had no evidence to support any of them. They were thoughts, interpretations, and judgments, which our mind automatically tends to jump to in a variety of situations.  (Don’t get mad that I assumed it was a “he.” I guess I supposed it was a man due to the type of vehicle and all the sports stickers.)
My car was a few feet behind his at this point.  I had the choice to slow down so I wouldn’t be right on top of him or to try to switch lanes to get out from behind him, but I felt “wronged,” another thought and interpretation. It’s quite possible that the person didn’t see me, was preoccupied, and that it had noting to do with me being wronged, but my emotions were high, and I had not considered this.
My car was close behind his, and I thought again, “Maybe this is an old person or someone on the phone, and they don’t even realize I’m right behind them,” so I turned on my headlights quickly so that they’d notice me in the rear view mirror. Probably not the best move.
We got a red light, and the driver pulled alongside me, rolled down his window, and began screaming at me with a face that I found very scary.  I thought about continuing to look ahead, but I was afraid it would just escalate the situation, as he was clearly livid and, in my estimation, bordering on out of control.  Based on the clothing the men in the car were wearing and the neighborhood I was in at the time, it occurred to me that I might have been in an altercation with gang members. (I worked as a social worker in that area.)
I chose to roll down my window and let him yell at me rather than ignore him.  He swore at me, told me what the speed limit was, and in sentences sprinkled with more harsh vulgarities and name calling, he asked me twice why I was tailgating him.
I took a deep breath, and in a soft but audible voice, said as sincerely as I possibly could, “I’m sorry. I didn’t mean to tailgate you.”  He looked away, called me another harsh name, and sped off.
When I apologized, he looked as if he didn’t know what to do with me. It is my belief, though again, just an interpretation, that by doing the DBT skill of Opposite Action in response to my fear (rolling the window down) and the Opposite Action of my anger (being a little bit kind instead of returning the anger with like emotions and further fueling the fire), I was able to escape the situation unharmed in any way. I truly believe that I was in potential danger had the man become more upset.
I pulled into the parking lot of the store I was heading to. As soon as I parked, tears uncontrollably began to stream down my face. I was suddenly having the fear reaction that I was too paralyzed to experience when I felt that I was in imminent danger.
How intelligent our minds and bodies are. The tears kept streaming. I noticed more thoughts and judgments, mostly around feeling very hurt that the man had yelled and sworn at me. I became aware in that moment that old wounds had been opened by this incident. The little girl inside who had grown terrified of men yelling and swearing at her as a child and young adult — she showed up to hold this all too familiar experience.
I reached out on Twitter and received such beautiful support from my BPD Friends, for which I am truly grateful.
I got home safely.  I learned a lot from this incident and am so pleased that I was able to become skillful, even in the midst of a highly triggering, potentially dangerous situation.
I plan to engage in extra self-soothing and self-care tonight to help restore an equilibrium to my startled nervous system. I also pledge that next time someone cuts me off, I will stay far behind the driver or even pull over. You never know who you are dealing with, and nothing like this is ever worth putting ourselves in harm’s way. I also got a taste of my own medicine. While I’ve never been as seemingly threatening as the men I encountered today, I have been rude, flashed the finger, and have done other aggressive things when upset behind the wheel.  I plan on handling myself with much more dignity and safety in the future.
Have you ever been involved in road rage?  How did you handle it?  How might you apply mindfulness and other DBT skills the next time someone cuts you off or otherwise upsets you in traffic or in a parking lot?
Thanks for reading.
More Soon.
February 5, 2013/8 Comments/by Debbie (author)
https://www.my-borderline-personality-disorder.com/wp-content/uploads/2018/12/healing-from-bpd-e1577900769964.jpg 0 0 Debbie (author) https://www.my-borderline-personality-disorder.com/wp-content/uploads/2018/12/healing-from-bpd-e1577900769964.jpg Debbie (author)2013-02-05 00:02:002013-02-05 00:02:00Triggered by Road Rage (and How I Used DBT Skills to Cope)
8 replies

Online DBT Group (Co-facilitated by Debbie Corso!)Who Am I? This Personality Test Can Help With A Piece of the Puzzle
Scroll to top