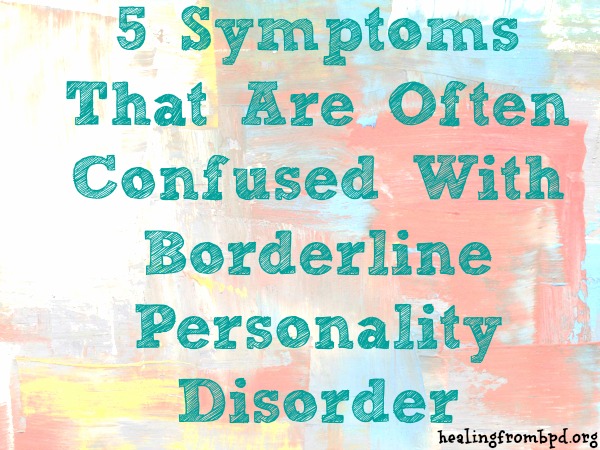 Mental illness can be difficult enough for friends and loved ones to detect at all, but distinguishing among similar conditions is even more of a challenge. In particular, Borderline Personality Disorder (BPD) can be easily mistaken for other conditions, most often Bipolar Disorder.

It goes without saying that an accurate diagnosis is crucial: not only will the wrong treatments and medications fail to relieve suffering, they threaten to make things worse (and in some cases can induce bouts of psychosis).

Unlike fully somatic diseases— such as cancer or lupus, for example—BPD and other mental illnesses can’t be diagnosed through a blood test or MRI, therefore, accurate analysis depends on the observation of behavior over time. Due to the fact that BPD tends to distort its victims’ self-image, the insights of friends and family can be essential in accurately assessing BPD and detecting it in its early stages. So, let’s take a look at what BPD is—and what it is not.

While BPD and Bipolar Disorder both tend to affect one’s ability to have harmonious relationships with others, BPD’s overall symptoms have different hallmarks that can be spotted under careful scrutiny.  Please note that not all people with BPD experience the same symptoms or express the same behaviors. This is a general overview of some of those symptoms and behaviors experienced by some people who have BPD. Only a qualified, licensed psychiatric professional can accurately diagnose any condition. If you think you have Borderline Personality Disorder, Bipolar Disorder, or any other health issues, contact a qualified provider for evaluation.

· BPD issues often center on personal self-image and relationships with others. In combination with other criteria, unstable relationships, such as bouncing from one high-drama romance to the next is a classic indicator of BPD, as are poor self-esteem and/or self-loathing. An all-or-nothing desire to be validated by a partner and an intense dislike of being alone can often be observed among BPD sufferers. In addition, maladaptive “manipulative” behaviors, often developed as survival behaviors in childhood, may still surface in adulthood in order to secure emotional attention or avoid feeling abandoned. These, along with other maladaptive behaviors, can be unlearned through treatments like DBT (Dialectical Behavior Therapy), as Debbie Corso has experienced.

· Self-destructive, impulsive behavior. Going hand-in-hand with problems of self-worth, BPD sufferers sometimes act out on the intensely negative feelings they harbor towards themselves through impulsive behavior. They may demonstrate patterns of self-harm (cutting, inflicting cigarette burns) or even suicidal ideations. Similarly, sharp bouts of addictive behavior may be a manifestation of a BPD sufferer’s negative feelings, which may manifest in a number of ways, such as over-spending, binge eating, drug and alcohol, and gambling.

· Intense, rapid cycles. Perhaps the most reliable indicators of BPD revolve around rapid, intense cycles of emotion and behavior. For example, if a minor change in plans or an unguarded comment from a boyfriend or girlfriend sends someone into a tailspin of anger or depression—a fit of emotion that ends just as abruptly as it begins—there is a strong possibility of BPD. Likewise, BPD can provoke grandiose, sudden changes in goals. For example, if an individual makes out-of-nowhere announcements about career changes, only to renounce them the next day, he or she may be contending with BPD.

· A more even cycling between extremes. Although both BPD and Bipolar sufferers exhibit intense states of emotion, bipolarity (or manic depression, as it used to be called), is an oscillation between high-highs and low-lows. In the manic/”high” stage, a Bipolar individual may show excessive energy, irritability and difficulty sleeping. When the depressed pole manifests, look for social withdrawal and possible suicidal expressions.

Again, while on the surface these mood swings in BPD and bipolarity can look the same, BPD fluctuations may only last a few hours, while bipolar swings can last weeks.

· Less dependency on external triggers. Because BPD often hinges on an unhealthy equation between oneself and others, outbursts are often produced by outer stimuli. On the other hand, bipolar disorder tends to go up and down according to an internal track. Looking for trigger-patterns in problem behavior can be one of the keys a professionals often look to when differentiating between the two.

Again, since any one of these symptoms alone is not ample proof of any disorder, be sure to turn to a qualified clinician who can look for clusters of these indicators, make an accurate diagnosis, and suggest appropriate treatment options.

Irritability and impulsive behavior, both hallmarks of BPD and bipolar, are also signs of ADHD and Asperger’s. Furthermore, it’s not unheard of that people suffer from more than one disorder at the same time, making a clear diagnosis even trickier. In any case, if you witness at least a few of these indicators, gently, but assertively, take steps to encourage get your friend or relative the professional help they need.

Marcela De Vivo is a freelance health & wellness writer from California. She specializes in a number of topics, from alternative medicine to pharmaceuticals, fitness, and special needs issues.

Upcoming Documentary on BPD (and Why I Agreed To Be In It)Overcoming One of My Biggest Regrets From When BPD Ruled My Life (Borderline...
Scroll to top