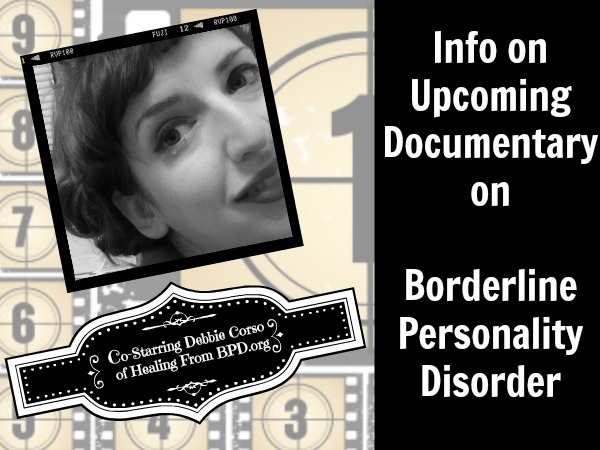 I always had a feeling I’d end up on the silver screen, having loved classic movies all of my life and dreaming of being a starlet. What I didn’t expect was what my first “starring role” would be: a raw, up-close and personal portrait-style interview in a documentary on Borderline Personality Disorder.  Yes, upon the eventual release of this film, I’ll be able to declare, “I’m not just a woman who suffered from BPD. I also played one in a movie.”

This is not the first documentary on the subject that I’ve been invited to participate in, but it is the first one I truly felt ready for, and I felt a connection with producer and psychologist Tami Sattler’s mission to shine the light of awareness on this disorder, spread hope about the possibility of recovery, and her hope to potentially save lives through this film.
As the weeks have gotten closer, I’ve had my share of anxiety, doubts, and questions:
Should I do this?
I had so many questions for the producer, particularly around what angle this movie will take and whether the overall tone would be positive and encouraging or, similar to some other movies I’ve seen on the topic, highly dramatic and depressing. If it were the latter, I wanted nothing to do with the project.  I was relieved and excited to find out Tami’s intentions around the film and how at ease she wants me and the other cast members/subjects to feel about how BPD is portrayed.  Don’t get me wrong.  There is a lot of pain and suffering that comes with having BPD, but this is well-known. What is lesser known are the personal stories of everyday people who have this diagnosis and how many are emerging from meeting the criteria and going, what I like to call “beyond the borderline.”
Am I ready for this type of exposure? Granted I’ve been very open globally about my condition and recovery, but this is a movie, after all, with the potential to reach a massive audience. But yes, I feel ready.

I’ll be posting “behind the scenes” photos from the set on Facebook and Twitter later this week, so keep a look out for those.

I’m so excited to be a part of this project and look forward to sharing updates with you along the way.

Thanks for reading.
More Soon.

MBT: The “Missing Link” of DBT? (Mentalization Based Treatment...5 Symptoms That Are Often Confused With Borderline Personality Disorder (BPD)...
Scroll to top