I recently blogged about why I agreed to be in Tami Sattler’s documentary on Borderline Personality Disorder in this post.  I also promised to bring you behind the scenes photos and information on the project since many of you, my dear readers, expressed in interest in such things via my Facebook page and Twitter feed.

I was nervous and excited in the days leading up to filming.  I’ve been invited to be a part of a number of projects over the years, but fear and not feeling ready has held me back.  This weekend was a HUGE step, as I independently navigated the city streets of San Francisco and went to film on location in Sausalito.

Here is a photo of me with producer Tami Sattler before we really started talking. Interesting body language, with both of our heads tilting in opposite directions. (Tami is a licensed therapist, so I’m sure she’s noticing this as well as she reads this post.)  Tami’s vision is to bring awareness to BPD – what it is and what it is not.  She seeks, as I do, to break down stigmas and help professionals to understand that while Borderline Personality Disorder is a serious mental illness, it is also treatable.  People can and do get better.  In fact, I am not the only subject profiled who is in recovery, but I’ll get to that in a bit.  She also wants to reach those who are suffering to let them know that, no matter where they are on their path, there is hope.  I’m sure you can see why I found this project to be such a good match! 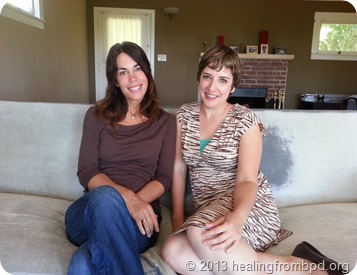 As time went on, Tami and I had a very relaxed experience together.  I progressively felt at ease sharing my story and answering her questions, even the ones that took me back to darker times in life, as I recently wrote about in this post about when I was twenty-three and highly symptomatic and suffering. 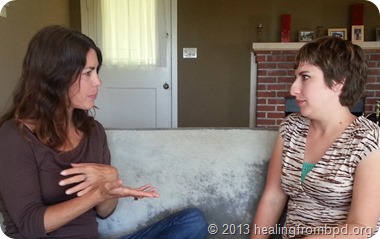 Filming was fun and exciting.  It wasn’t a big time Hollywood production, but a serious, independent film with a professional staff.  You can see a tiny bit of Paul, our camera man filming me here.  I wish I had gotten a pic with him, too! 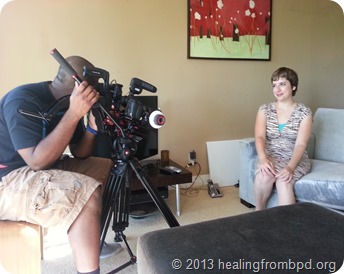 One of the most fun parts of the film was when we took a walk down to the water in Sausalito.  It was so beautiful, and it helped me to open up about additional questions that Tami had for me.  The second pic of she and I by the boats is one of my favorites from the day. 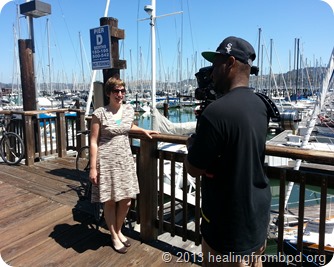 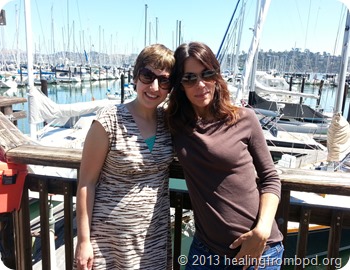 I reflected on what it meant to be a part of this project and posted this on my Facebook wall the night of the shoot: 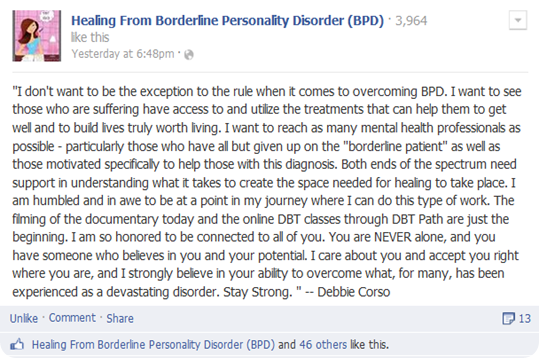 Another subject of the film, Teresa Lynne of Essence Happens is also in town from Georgia and was filmed today telling her story of recovery from BPD. Teresa now dedicates her life to coaching others with BPD as well as their family members. She also works with people in recovery and  those who have no diagnosis at all and are seeking life coaching. I’m actually one of her clients!  I’ll have some pics of her and I together in the coming week (as well as a collaboration video), as we’ll be trekking around San Francisco together this weekend.  But in the meantime, she was smart enough to get a photo with Paul, so here’s that image: 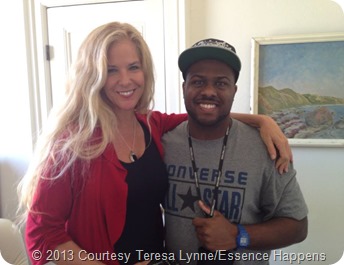 I want to give a HUGE shout out to all of my readers who chose to invest in this film.  While the project is funded primarily by producer Tami Sattler, she did put up a KickStarter page to help raise some capital. In exchange, backers are given tickets to screening events, and depending on their level of contribution, can have their names in the credits.  You can check out the page and watch a section of the movie that covers another subject who goes by the name “Presh,” for Precious.

This project is something we envision being distributed widely, and we think that even the Sundance Film Festival is a realistic possibility.  The anticipated release of this film in Summer 2014.  I’ll, of course, keep you posted along the way.

So excited to share all of this with you.

Thank you for reading.
More soon.

Overcoming One of My Biggest Regrets From When BPD Ruled My Life (Borderline...Making BPD Stigma Free: For Me, My daughter, and YOU (Guest post by Joyce S...
Scroll to top