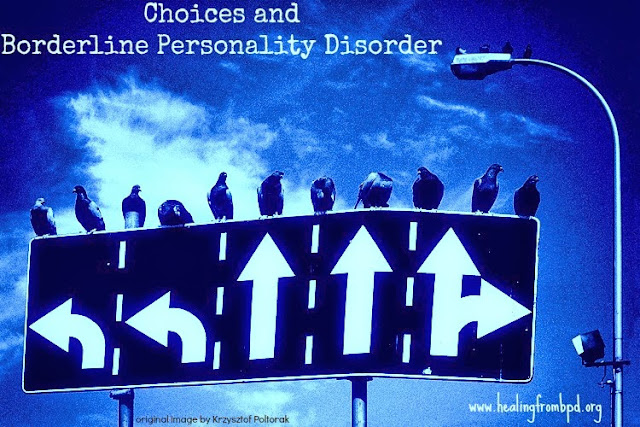 “You have choices.  Even though you may feel like BPD or being emotionally dysregulated causes you to be completely out of control, this is just an illusion.  Every moment is a choice.”
It can be really difficult to hear this and nearly impossible to initially believe it when you have Borderline Personality Disorder, are a very emotionally sensitive person, or if you suffer from chronic emotion dysregulation.  I remember when first heard it while I was in the thick of the intense symptomology of BPD.
I was hurt and offended that someone seemed to imply that I was CHOOSING my misery.  I was appalled that they thought I would CHOOSE to suffer….to make the same mistakes over…to sabotage myself and important relationships.  What kind of monster did they think I was?  The truth is that they didn’t think I was a monster.
They thought I was, (and I extend this same compassion to many of my students today as I get to truly know them), a hurting person who was living to a large extent unconsciously on a number of levels. I don’t mean this in the sense of ignorance as stupidity, but as of truly not knowing better — and boy was I there for many years.  I wasn’t fully aware of who I was, what I wanted, what my intentions were, and how my actions impacted not only myself but also others around me.
It was with time and learning DBT (Dialectical Behavior Therapy) skills that I began to understand what was meant by this concept that I had a choice in every moment.  As I began to learn the core concepts of DBT Mindfulness, I learned skills that helped me to understand how shifts in perspective could help me change my life.
Maya Angelou’s quote, “When you know better, you do better,” aptly captures the concept of choices and BPD for me.  Up until now, you’ve been doing the best you can, where you are, and with what you have.  As you learn new skills and alternative, more effective ways of coping with your emotional distress and pain that cause less suffering than your current behaviors, then you become more accountable to be responsible and begin practicing these newly learned skills.

It doesn’t happen overnight, and if you’re like me (determined but imperfect), you might fall down a few times before you really get consistent with living skillfully.

Always a sensitive person (since childhood), I was quite easily and frequently dysregulted emotionally when I got into my twenties.  Things that others might pass of as offensive slights felt like wounding daggers to my psyche and nearly non-existent sense of self.  I told myself stories all the time about why people did the things they did.  I believe these stories often without checking the facts.  I thought that if I had a thought or a feeling, it had to be true, and I acted in accordance with this belief, often causing myself and other upset and pain.
I didn’t realize I had a choice.  I was in constant fear of spiraling of control, of losing everything (which I ironically did a number of times), and of being alone.  That fear kept me in an almost constant adrenaline rush/survival state.  I was afraid to slow down.  Afraid to be alone with myself. Afraid to feel my feelings and face myself.

As we learn Mindfulness, we discover ways to slow down our thoughts, and more importantly, our REACTIONS to those thoughts. We put a buffer of time between the initial thought or intense emotion and taking any action — especially actions that we often later regret (which involve self-sabotage or harm on any level.)

As you go through the rest of the week, when you notice an intense emotion or upsetting thought, try just noticing it.  Notice that you can have the thought or feeling with the option of choice of acting on it.  Try with little things at first to build up your confidence.

For example, let’s say someone cuts you off in traffic.  The immediate tendency for most of us is to tense up, tell ourselves what an idiot the other person must be, and maybe to even give them a rude gesture.  Look for opportunities like this to just notice, observe, and describe your experience without taking any action. Make a different choice. Think higher.

“I was just cut off by that person. I notice this makes me angry. I notice I’m feeling tense.  I can release this. It has passed. I can move on. All is well.”

Every moment is a choice.

I hope this helped you in some way today.