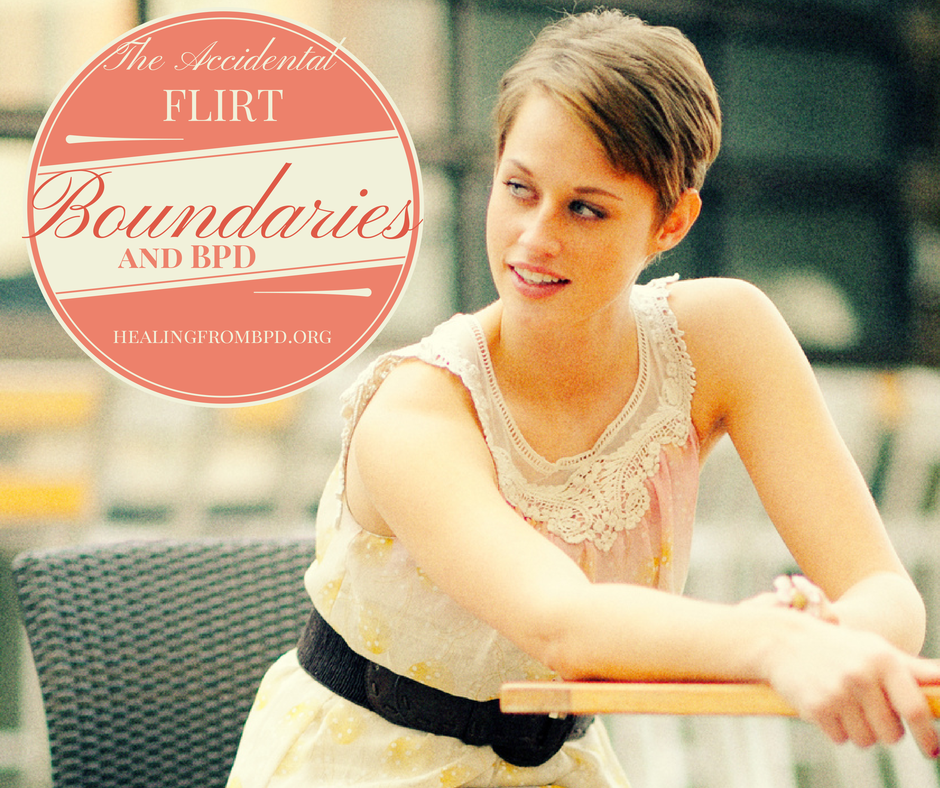 What is a boundary?  In interpersonal relationships, you might imagine yourself being in a protective bubble. This bubble grows or shrinks in size depending on who you are around.  The smaller the bubble, the closer and more intimate the other person can get to you, and of courses the opposite is true the larger the bubble.  You control the size of your boundaries, and it is the expectation is the other person will respect your limits.  This, of course, does not always happen.  With some people, you must repeatedly reinforce where you stand in term of your boundaries.  If they continuously disregard and disrespect the limits you have set, it may be time to re-evaluate whether this is a relationship you want to continue to nurture.

In the past, when I experienced the symptoms of Borderline Personality Disorder (BPD) fiercely, my overall sense of boundaries and enforcing them were non-existent.  I remember scenarios such as meeting a stranger at a bus stop, them being friendly, and me then literally unloading my whole life story (or at least the latest dramatic highlights) to them before the bus arrived.  As my stranger “friend” would board the bus and I’d wait for mine, I’d be left with feelings of regret and an ickyness that at the time I couldn’t describe — it just felt “dirty,” I suppose — I felt emotionally naked — very vulnerable and exposed…yet I repeatedly did this all of the time.

Perhaps I longed for connection, and since my life in general was very unstable at that time, and I didn’t have any healthy relationships that allowed for a balanced reciprocation of personal information, I tried to connect with anyone who would listen… anyone who had warm eyes or a soft smile… anyone who I thought would care to make a connection with me.  Unfortunately, a lack of boundaries often achieves the opposite of connection: it can push people away.

People who have a balanced set of boundaries can spot a person with poor boundaries from a mile away. Why? Because when we behave from a boundary-less place, it makes others uncomfortable.  By coming on too strong (as I did in the bus stop… or by “falling madly in love” over night with a potential partner or even a potential friend), people with a healthier sense of boundaries may see this as a red flag and avoid going deeper with us.  On the other side of the coin, there are some who prey on those with poor boundaries, and they make take advantage of the situation. I’ve certainly experienced both.

Another issue that I had with interpersonal effectiveness when my boundaries were poor is that men (and women) would hit on me all of the time.  When I was in a relationship with a steady boyfriend, he would get so upset, insisting that I’m “asking for it” by overtly flirting with anyone and everyone, including the cashier who rang up our groceries.  I would get so bent out of shape and offended.  I saw my boyfriend as jealous, possessive, and insecure, and I thought I must have been hot stuff to be hit on so often. That was my version of reality, and I believed it.  I would also sometime have (again, “dirty”) feelings inside in response to feeling that men were being inappropriate with me “all of the time.”

When I began to consider that I might have had some role in the situation, I began to change my behavior.  This did not happen overnight.  Even when I set the intention to be aware of the messages I was sending to others, I’d still find myself falling into automatic flirtation — much to my own, and my boyfriend’s dismay.  I had to admit that I had developed a way of connecting with others that sent messages I didn’t intend to send.  I saw my behaviors, words, and actions as “nice,” but they were often misinterpreted as signals that I was interested in something more with the person, usually of a romantic nature.

I began to notice.  I began to pause before engaging in interaction. I became mindful of my words, tone of voice, body language, and choice of words.  This might seem like a lot off trouble and like a process that requires a lot of energy — and it does; but, I knew it would be worth it to me.  I was so fed up with boyfriends accusing me of deliberately flirting, even in front of them, disrespecting them, myself, and the relationship.  I needed to know if I really was doing anything and then make adjustments and changes to alter the course of this repetitive pattern.

As a result, over the years, I’ve become more reserved in my interactions with strangers or people I do not know well.  I sometimes feel the need to clarify if I am concerned that I’ve sent the wrong message or led someone on a way that I did not mean to do so.  For the most part though, I’ve learned to modulate the intensity of my level of sharing and enthusiasm with people until the relationship naturally progresses to a place where there would be less room for misunderstanding of my intentions.

I have also learned to (most of the time!) share personal information in a way that makes sense to the relationship and at a pace that makes sense for the type of relationship. (No more bus stop life stories!)  I also take the time to observe how a person responds to my sharing and what level of respect and dignity my sharing is treated with… and this determines how much I share or do not share in future interactions.

Boundaries are a very important part of life and can be a challenge when we are emotionally sensitive or have BPD.  Can you relate to any part of my story?

One of the books that has helped me over the years is “Boundaries: Where You End and I Begin.”

How are your boundaries at this point in your life?  Have you noticed a shift over the years?  What has helped (or what do you think might help) you to establish healthier boundaries?

PS — If you struggle with boundaries, check out my live, weekly, ►online course◄ where I can work with you on this issue.

Are you selfish for being skillful?Coping with EXTREME Anxiety and Panic
Scroll to top