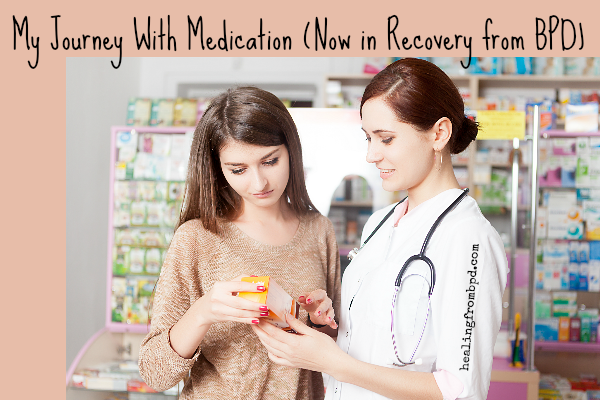 I have had a long journey with psychiatric medications the predates my diagnosis of Borderline Personality Disorder.   As a young teenager (age 15), I was put on Zoloft for depression after entering a residential group home for girls.  I would remain on Zoloft (other than those impulsive cold turkey stops and those times when I didn’t have insurance or the ability to pay) for just short of two decades before being told I had to stop taking it.  It was suspected to be the cause of severe jaw tightening, tension, and pain that I had begun experiencing.  My psychiatrist told me that this symptom can arise after long-term use.

The other drug that I was on for a very long time (on and off for about twenty years) and that is by no means intended to be a long-term drug, is Ativan.  I even wrote this post about it years ago, regarding my body’s addiction to the drug, even when I was down to just 0.5 mg a day.  (At one point, about 12 years ago, I was on 4 mg a day!)

I was often thought to be bipolar rapid cycling, and I had a clear, severe case of Obsessive Compulsive Disorder (OCD) that became disabling at one point.  Years of Zoloft and then Paxil (which I had to stop due to an allergy) and then Celexa helped manage the symptoms while I underwent seven years of Cognitive Behavior Therapy (CBT).  I was then taken off of Celexa, because it was shown to cause heart issues in some people (and the test my psychiatrist sent me for showed I was at risk), so I was then put on Prozac.

In the past, I was put on the following drugs to try to manage the symptoms that I was presenting.  Keep in mind that my seeking of psychiatric care was very erratic.  In my twenties, I was often homeless, bouncing from one shelter or psychiatric inpatient to the next, and I didn’t have a steady psychiatrist.  I saw so many different providers each year, and they didn’t communicate with each other because I was so erratic and couldn’t pull it together to get my medical records.  I had not yet been diagnosed with BPD, though when I was 19, my discharge paperwork from one of my hospitalizations read under follow-up care “Rule out Borderline Personality Disorder.”  I ripped it up and didn’t follow up on this advice for 10+ years later.

Here are some other psychiatric drugs I have been on over the years:

I’m sure that there were many more that I can’t even remember now.
Recently, while on steroid medication, I was unable to take the Prozac, as my psychiatrist was concerned about it inducing mania.  By the time my steroid treatment was over, I learned that the Prozac was completely out of my system (I was only on 10 mg a day for the past few years, primarily to manage OCD), so I decided to give it a shot off of it.  So far so good.  I’ve been under some stress, so I’ve noticed a slight increase in OCD symptoms, but nothing major.  I’ve been managing my best with the CBT skills.
Also, I had so much fatigue recently from MS that I skipped my Ativan pills for several days.  When I learned from my psychiatrist that this drug was also out of my system, and I didn’t have the terrifying withdrawals that we imagined I might, I decided to try staying off of this as well.
It is SO IMPORTANT that you make wise decisions around the course of your medication and that you do not stop taking your meds as prescribed or cold turkey.  Do this only under the guidance and advice of a qualified, licensed psychiatrist for your safety and well-being.   I realize I should have done this with the Ativan as well. I am very fortunate that everything turned out okay.
Am I happy to be off of psychiatric meds?  That’s an interesting question. In some ways, yes.  It feels good to be stable off of them; however, I fully acknowledge that there were times in my life that they were completely necessary, and if I were to feel that I needed them again, I would consult with my psychiatrist and go back on them if I needed to do so.  There is no shame in this. This article is not about vilifying medication, psychiatric or otherwise. It’s not about making medication “bad.” It’s about making wise, informed decisions for our overall well-being.
I hope this post helped you in some way.
Let me know!
Thanks for reading.
More Soon.
In kindness,
Debbie
To learn more about the author of this post, visit www.emotionallysensitive.com
April 3, 2015/2 Comments/by Healing From BPD
https://www.my-borderline-personality-disorder.com/wp-content/uploads/2018/12/healing-from-bpd-e1577900769964.jpg 0 0 Healing From BPD https://www.my-borderline-personality-disorder.com/wp-content/uploads/2018/12/healing-from-bpd-e1577900769964.jpg Healing From BPD2015-04-03 17:30:002015-04-03 17:30:00My Journey With Medication (Now in Recovery from BPD)
2 replies

Coping with Anxiety When You ‘re Emotionally SensitiveBPD: Why Do We Sabotage?
Scroll to top