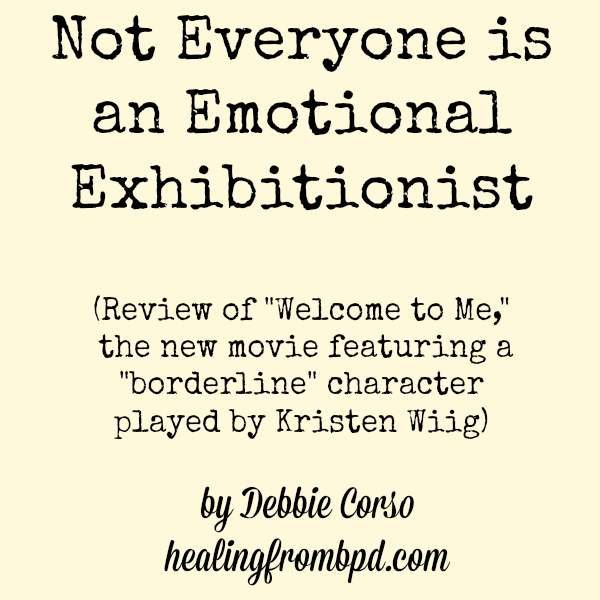 I wondered how much I would relate to the character of Alice, played by Kristen Wiig in the new movie Welcome to Me.  In the movie, Alice says that she was thought to have bipolar rapid cycling  but was later told she had borderline personality disorder. I could relate to that.

She disclosed this while on-camera on an infomercial.  Not her infomercial mind you.  She was an audience member who was selected… errr, who selected herself as a volunteer to try a sample of a high protein algae drink on camera.  Instead of doing so, she began to talk about herself and her diagnosis while her mortified friend signaled and called for her to return to the audience.  Alice ignored her.

Alice has a habit of disclosing deeply personal information at highly appropriate times and then getting angry with those who attempt to censor her or inform her that her behavior is out of line.  She is off of her mood stabilizing medications (she ditched them against professional advice) and is threatening to stop her therapy sessions since they were only required in order for her to receive her disability checks. She no longer needs those since becoming suddenly very rich, so she reasons she no longer needs therapy.

Alice’s therapist desperately wants to help her, but she refuses to observe and respect limits set within the therapeutic session.  She violates her therapist’s trust and causes him to seek a 5150 psychiatric hold to have her observed as a danger to herself.

She is almost constantly despondent and in a near constant state of self absorption and preoccupation. And, she is portrayed as not being very intellectual, mispronouncing simple words like “carbohydrates.”

With the exception of the last sentence I can’t help but wonder, with an open mind and a willingness to be vulnerable, if I was ever or am currently ever perceived to be any of the other things I observed about Alice.  I think it’s important to be willing to search one’s self in order to continue to grow.  The quote that opens the movie captures this perfectly, “I study myself more than any other subject. That is my physics. That is my metaphysics” by Michel de Montaigne.  To this, I can certainly relate.

Because of this opening quote, I imagined that Alice would be an introspective character who would be conscious of her process and deliberately seeking to understand and rectify her dysfunctional behavior.  What I saw instead was a lack of awareness, which is where we all start.

She makes a career out of her dysfunction, publicly displaying the past traumas that play out in her head on a stage shown on television for all to see. She Skypes her mom while on the air.  Displeased, and with Alice in disbelief that her mother or anyone else wouldn’t want the attention of being on television like she does, her mother tells her “Not everyone is an emotional exhibitionist.”

Alice wants to be seen. She wants to be heard.  She wants to process through the past traumas of her life and have victory of them. She wants to rewrite the script. And, she does all of this in the best ways she knows how.  Meanwhile, she’s dealing with unstable moods and behaving in impulsive ways.  She’s writing checks for millions beyond what she actually has (having not considered that taxes would be taken out of her big pay day), has spontaneous sex with different men, tells a man she loves him after only knowing him 4 minutes, and she eventually does end up briefly in the psychiatric hospital after, in what appears to be a dissociated state, she walks through a casino buck naked.

While on the psychiatric hold, her best friend tells her that she is a “terrible friend” and that she only cares about her own pain…that because she’s sensitive, she thinks there is no room for anyone else to be vulnerable.  Alice’s friend recently lost her job.  She told Alice, and Alice showed absolutely no empathy or concern and immediately redirected the conversation back to her herself and her own personal dramas and crises. I remember being in a place where I thought only my pain mattered. It was a wakeup call for me, and it is for the character of Alice as well.

At first I was a little disappointed that this character was not more highly relatable to me personally, but the truth is that ALL types of people have BPD.  The criteria for meeting the diagnosis are such that you could fill a room with people who have the diagnosis, and they may all meet a different collection of symptoms. The character of Alice is one possible representation of a living, breathing, woman who suffers from this disorder and her attempts to cope and find happiness and connection in this world. That actually makes her relatable after all.

Let me know YOUR thoughts on the film!

If you have borderline personality disorder and are seeking intensive help to overcome and reclaim your life, check out the Roanne Program. This program focuses on the developmental years of early adulthood and is open to women and men between the ages of 17 and 28. The program is located in California, close to the Malibu coast. Locals and those willing to relocate to the area for treatment often find it to be a beautiful place to recover. The Roanne Program is private pay only (they do not accept insurance). Included in tuition is room and board in a luxury apartment in the area. For more information, call 888-814-5985 or click HERE. Let them know you found them through Healing From BPD’s article on Welcome to Me!