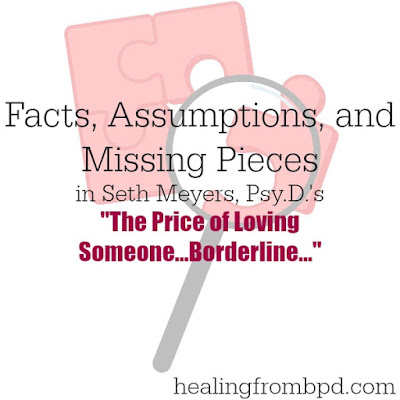 Ok. Wow. Lots of emotions have been activated in response to an article that Psychology Today reshared today on their Facebook page, entitled, “The Price of Loving Someone Narcissistic or Borderline…and why it can take so long to recover.”  Before I even began to read the (mostly insightful) comments and feedback left for the author, I had my own visceral reaction. In the pit of my stomach, I dreaded, “What I was about to read?”

Why? Because there are many incredibly sensitive, passionate, intelligent, creative, people with Borderline Personality Disorder or who have BPD traits on this planet, and when an article comes out that harshly, or even unfairly, criticizes who they are…that makes sweeping generalizations that ALL people with BPD traits are vindictive manipulative, or drama seekers, I know those beating hearts are hurting behind their screens as they are reading it.

In fact, that’s why, in part, I started this blog (Healing From BPD) back in 2010. To give a new face to the “Borderline,” and to put out encouraging, hopeful materials on how those of us with this disorder can and do get better. (I’m in recovery and no longer meet the criteria for a BPD diagnosis. If you’re interested in learning more, you can read about my story by clicking HERE after you finish this article.)

The first paragraph, where Meyers says that he has found in his clinical practice that those who have relationships with people with narcissistic or borderline personalities “often leads to one of the most upsetting relationship experiences a person can have…the closer you are to someone with one of these personalities, the worse the emotional injury,” really stings; In part, it stings because I know that when I was in the thick of BPD illness, that statement was probably true. I was a mess, and my relationships, or lack thereof, were a reflection of that.

But, keep in mind that not ALL people with BPD behave this way. In fact, those who are in treatment, learning DBT Skills, and working hard to manage their emotions and improve their interpersonal effectiveness may have his type of personality but are not (or no longer) acting in self-destructive, hurtful ways. So, let’s cast aside that sweeping generalization.

I was relieved to read on and find that Meyers does not paint a picture of someone with BPD as intentionally seeking to hurt and connive.  He acknowledges that BPD is something that develops over time, and the possible reasons he cited for its development did resonate with me personally.  We often wind up with distorted views and maladaptive behaviors to try to get our needs met, and in a word, they unfortunately don’t work in healthy relationships.

He also touches upon the fears that are at the core of many of the bewildering behaviors those with BPD traits may exhibit in a relationship, including the classic fear of abandonment and issues with emotional connection and intensity, bringing, hopefully, a compassionate perspective as far as the “why” of such behaviors.

When I read his comments that those with BPD “don’t fight fairly or consistently. [They] get nasty in a way you may have never seen before…[using] words as bullets, intended to hit you where you’re most vulnerable” and that we will sometimes start arguments and then blame the whole argument on the other person, again, when I didn’t have the skills to manage my intense emotions, take a step back, be mindful of my experience, and make the choice to respond in a way that would not damage the relationship or hurt he other person, yes, I did behave this way.

But, people don’t choose to be “borderline.” It doesn’t mean someone doesn’t love you if they have trait-related outbursts and say hurtful things. I’m not justifying the behavior, and at the same time, let’s see it for what it is: behavior.  Behavior that can change. Behavior coming from a place of doing the best you can with what you know, until you know better. There is a hurting person underneath those behaviors. Emotionally terrified at times. You’re dealing with someone who, emotionally at times, is as fearful as a wounded animal who lashes out in protection mode. Keep that in mind. It’s most often not malicious. It’s an attempt at survival.

What I wish, and what would be nice to see in general when professionals write articles on what nightmares “borderlines” can be, is that they close with something a bit hopeful, such as “the good news is, over time, those with this disorder, with the right treatment and determination, can get better. Realizing this doesn’t help you in the now if your loved ones is lashing out, so be sure to seek support for yourself regarding setting limits and boundaries and guidance in suggesting resources that may help your loved one.”

Yes, in an ideal world.

I hope this helped you in some way.

The Sadness Spiral (BPD and Afraid to Feel)

Fear of Real or Imagined Abandonment & BPD
Scroll to top