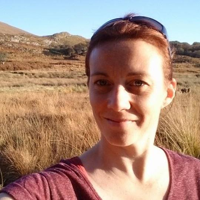 Please welcome guest blogger Fiona, who actively blogs about her mental health experience to a captive audience at Sunny Spells and Scattered Showers. Her story is honest, refreshing, and inspiring. TRIGGER WARNING: Mentions of self-harm and a suicide attempt (not graphic).

Eight years ago I was diagnosed with clinical depression, and two years ago, I was given a further diagnosis of borderline personality disorder. I remember so clearly the day that the bpd label landed in my life. I’d seen my therapist a few days previously, and we’d agreed that after my psychiatrist appointment I’d give her a call to let her know what had been said. I’d been years in the public mental health service at this stage, and years trying and failing to get to grips with my extremes of emotion. We were dealing with the depression as best as we could (medication and ongoing therapy), but for every step forward I took there seemed to be three backwards.

When bpd was finally mentioned it made so much sense. I remember coming home and reading up about it, and being both relieved at finally knowing what I was dealing with, yet horrified at the implications – how difficult it is to treat and to manage, and how it had impacted my behaviour for most of my life.
I struggled on for another year with my therapist doing the best she could to support me, but it was becoming increasingly clear that I needed more help than she could give, particularly as found it more and more challenging to respect the boundaries of the therapeutic relationship. I absolutely idolised her, and desperately wanted to be her favourite client, the one she would break all the rules for. This need became so strong that it finally got in the way of therapy entirely – I spent so much of my time between sessions agonising over not being able to contact her, that when I did eventually sit in the room with her, the shame of all that need overwhelmed me and I couldn’t even look at her.
The turning point came last May. It wasn’t a spectacular, everything-is-better-now turning point, but rather one that made everything so much worse. I took an overdose and while I thankfully did no lasting damage, it was the nail in the coffin for my relationship with my therapist. She knew I needed a different intervention, and my psychiatrist had started talking about DBT, so we agreed to finish and I went on the waiting list in my local Adult Mental Health Service.
All good, right? Wrong. Hindsight is wonderful. If I had known exactly how the situation would play out I would likely have done things very differently, but of course, I didn’t. Initially there was talk of DBT starting last September, which would only have been a couple of months after finishing with my therapist. But, it was decided that I needed a break of at least 6 months between therapies, so my DBT start date was pushed out to March.

During those 6 months, with no emotional support of any kind, depression came back with a vengeance, and by November last year I was signed out of work on sick leave (I’m yet to go back). We – my husband, family, friends and I – were hanging on by our fingernails. The promise of DBT was the only thing keeping me going. I was suicidal, self-harming, severely depressed and functioning at a bare minimum level. As I have two young kids this was incredibly difficult, and my general lack of ability to cope was starting to take a toll on my family.
As March approached, things got worse, not better. It was almost as though the closer I got to DBT, the less able I was to manage, kind of like the way we often get sick as soon as we go on holiday. My general practitioner was aware of this, my psychiatrist was aware of this, they were pushing as hard as they could to make sure I got a place. But at the last minute, the course was pulled. Not only was I not going to get a place, it was not going to go ahead at all (mental health services in Ireland are in severe crisis and have seen significant cuts to already paltry funding over the last few years)
I probably don’t need to describe how I reacted, how utterly devastated we were. There was something quite uniquely horrifying about being told that my last available option had just been taken away from me – it felt like drowning, watching the lifeboat get closer and closer all the while struggling and losing strength, and then watching them change their minds at the last minute and sail away, leaving me to fend for myself.
Perhaps unsurprisingly though, we had been expecting this.

I’ve been let down by our mental health services so many times over the years that I had never fully believed they would come through for me with something as huge as DBT. We spent a couple of days in shock, then started to consider alternatives. Private treatment wasn’t an option, it’s prohibitively expensive and we just do not have the means, particularly as I’m currently on unpaid sick leave. But the more we looked, the more we realised there was no alternative, we would have to find a way to make private therapy work.
This next bit was really, really hard to do. I’ve been blogging for years about the various aspects of my mental health drama and have a decent following, people who’ve been incredibly supportive of me and were very aware of just how badly I’d been let down by the HSE (our national health service). I needed to raise €5000 to fund a year of therapy, so I decided to try crowd funding. It felt horrible. What right did I have to ask for money? Why did I deserve to get help above any of the other people who’d been let down just as much as me? We thought long and hard about it, but eventually decided we had been left with no choice – there was literally no other way for me to make this happen, and a future without treatment would quickly have become no future at all.
The response was just staggering. In less than 24 hours, I’d been donated enough to provide me with a year of sessions with a private clinical psychologist, one who specialises in personality disorders. I started with her a couple of months ago, and am quite literally astounded at the difference the proper treatment is already making to my life. She’s explaining so much to me – about how our brains work, how our bodies react, how inextricably linked the two are, how they constantly feed into each other – and most importantly she’s helping me to see that none of this is my fault.
I’ve a lot of work left to do, but I’m doing better now than I have done in years, possibly ever. I’m aware that I’m fairly limited in what I can take on right now and I have to work hard to keep myself well – I need to keep things as simple as I can, avoid stress, watch my diet, my sleep, my exercise, the demands I put on myself – and I also need to be able to function as a parent. With all of this, going back to work just isn’t on the cards for the immediate future. Right now, it would be a push too far, a push that would take energy away from everything else that has to happen.
But, with the help of my new therapist, I’m in a far better place to accept that. I’m not jumping ahead to what’s going to come next, or what could be around the corner. I am where I am, and that’s the absolute best that I can do. I’m just so incredibly grateful to the people who made this possible for me. They have quite literally saved my life.
Fiona
—————————————-
ADVERTISEMENT: DBT Path offers entirely online DBT-informed psychoeducational courses worldwide. Affordable access to skills training!
June 6, 2016/0 Comments/by Healing From BPD
https://www.my-borderline-personality-disorder.com/wp-content/uploads/2018/12/healing-from-bpd-e1577900769964.jpg 0 0 Healing From BPD https://www.my-borderline-personality-disorder.com/wp-content/uploads/2018/12/healing-from-bpd-e1577900769964.jpg Healing From BPD2016-06-06 18:29:002018-12-14 18:52:30My Road to DBT (Fiona’s Story)
0 replies

Top Picks for ‪‎BPD‬ (and other) Books [Facebook Live Stream]

Borderline Personality Disorder: Is there hope?
Scroll to top