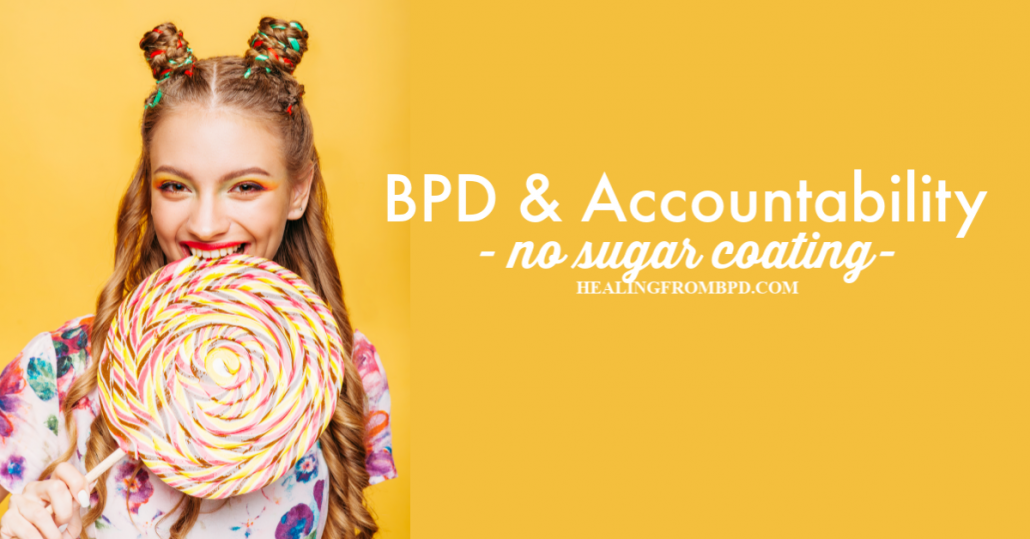 Are people with Borderline Personality Disorder (BPD) just “innocent victims” of their pasts, or are they responsible for their behavior?

You may be surprised by my answer. Let me know your thoughts after watching.

Someone recently asked this on a comment thread on my Facebook Page, Debbie of EmotionallySensitive.com, and here’s my response.

I hope this was helpful to you or your loved ones in some way.

Thanks for watching and reading.

VIDEO TRANSCRIPT (please note that the transcript may not be 100% accurate or verbatim to the video):

Hey everyone, it’s Debbie from emotionallysensitive.com; how are you today? I hope you’re doing well and I’m here with the topic about Accountability and Borderline Personality Disorder or having BPD traits because as a person in recovery from BPD, I often post really encouraging, hopeful, positive messages to people that have BPD traits as well as to those who love them.

And occasionally, I will get a comment which happened recently of someone really getting angry about this and saying, “Hey, you know my ex had BPD and he or she was abusive and how am I supposed to have compassion and empathy for someone even if they went through a lot as a child or in young adulthood for them to go on and develop something serious like BPD? How can you expect me to be okay with that?”

The thing to keep in mind though is someone who has BPD traits is usually not intentionally trying to hurt someone else, they don’t know any other way, they don’t have the skills to act in a manner that is appropriate or they may be afraid that if they try to get their needs met in an appropriate way, they won’t get met because that’s what they experience during the developmental years of their childhood.

They came to expect that they can’t expect to have their needs mad by acting normally and by acting appropriately so you might see maladaptive behaviors occasionally or more frequently — I’m not saying this in a judgmental way because I have been there. I myself have had difficulty with maladaptive behaviors and trying to get my needs met in unhealthy way. I understand.

You might see sarcasm, you might see lying, you might see jealousy, all of these things that come up for people who have these traits and have this disorder just because of what has happened in their development and their fear around being left or rejected or abandoned or not being good enough…or not being worthy of having their needs met and not having had it modeled how to do that in a way that is acceptable.

Now having said that, if someone is abusive, that is not acceptable and that is not something that I say, “Oh you should have empathy for that person. They went through a lot…so it’s okay that they abuse you.” No, it isn’t.

It’s not okay for any human being to abuse any other human being and so that person does need to be accountable for that behavior.

I’m celebrating my birthday tomorrow, I’m turning 39 and it took me a long time to get to the point where I became all about accountability, all about accepting that where I was wasn’t working, accepting that there were things that I had to change in order to have a life that was worth living in order to have relationships, meaningful lasting relationships with other healthy people.

And yes I, too, had a lot of behaviors and I expected to be able to have people excuse me and I tried to explain it away even before I even knew I had BPD I would say, “I’m so sorry, I’m so messed up, I have mental health issues, I’m this, I’m that, I can’t control myself, I’ve been through a lot, I didn’t mean it, I’m sorry” and that was genuine at that time and that was all I knew, I didn’t know any better. So, as Maya Angelou has said, “When you know better, you do better.”

So, should we have compassion and empathy for people who have BPD and BPD traits who engage in unhealthy behaviors? I say yes, should people who do things that hurt other people be held accountable for their behaviors whether they have any mental health diagnosis or not?

I say yes, and so when I make these videos about being compassionate and telling people to have compassion for themselves and the show empathy for themselves or to encourage family members or spouses to do so as well, this is not about excusing behaviors, it’s about it understanding behaviors and then people making choices that they need to make about setting their own personal limits and boundaries and doing what they need to do to stay safe and stay healthy and take care of themselves, it’s not about excusing it.

It is about asking people to think about it a bit as to where it’s coming from but it’s not about you allowing yourself to be repeatedly mistreated; please do take care of yourself.

So I hope that makes sense, I hope to see you guys next week signing up for my classes, doors open late next week for my new online BPD class where I teach you guys everything I learned that essentially helped me to personally overcome borderline personality disorder and no longer may meet the criteria and now it’s just my passion to teach.

I keep it real, I’m not going to sugarcoat it, I’m not going to say we’re a bunch of innocent angels and that we never do anything that’s offensive or upsetting or unskillful because that’s just not true; even in recovery we have challenges, even in recovery we have to work hard when we get emotionally dysregulated or something happens and that’s all part of life and it’s especially intense for those of us who are emotionally sensitive or who have BPD traits.

So, that is my input on the topic and I look forward to any feedback you have or any questions thank you guys so much, see you over at emotionallysensitive.com and in the next video, bye for now.