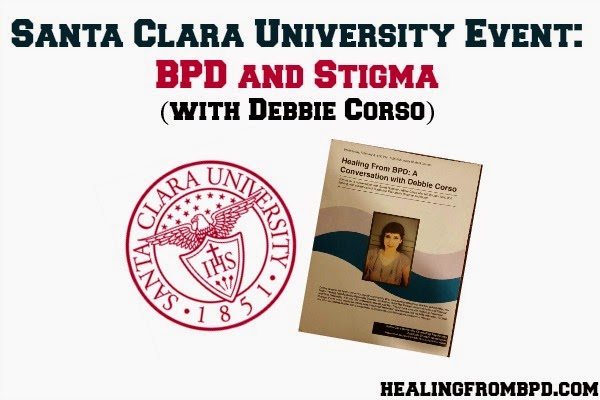 Does stigma against people suffering from borderline personality disorder or BPD traits exist? Does it exist among clinical professionals? Even professors? The unfortunate answer to all of these questions is: yes.
The level and intensity of the suffering that most people who are highly symptomatic and have borderline personality disorder or BPD traits have can feel immeasurable to the sufferer. If you throw into the mix a person in a helping position who has already established a cynical, unhelpful, generalized, and often in accurate assumption about this person, and it only makes matters much worse.
I can understand why many clinicians are hesitant or even afraid to work with people diagnosed with BPD. The media’s portrayal of us, in terms of characters in movies and even graphic images chosen alongside articles on this disorder, are often disturbing and scary.  The fact is, there is a wide range in the way that people with BPD present.
Just as you can have a room full of people diagnosed with bipolar disorder, and other than that fact they have very little else in common, the same is true when you have a group of people with BPD. To this point, to complicate matters further, the DSM has historically indicated that any combination of at least five out of nine criteria need to be met in order for a diagnosis of BPD to be made. When you do the math, you realize that it’s possible for a person to present with this disorder in a myriad of ways.
So, if you’ve been exposed to stories, media images, or even patients who have been extremely manipulative, outwardly angry, and the like, it does not mean that the next person who walks into your office who shares that she has been diagnosed with BPD, suspect she has it, or perhaps you suspect she has it, will have anything in common with that previous patient. This is part of the message that needs to be spread to clinicians, especially new therapists entering the field.
I was invited to speak last night at Santa Clara University to their Counseling Psychology Graduate Student Association. It was a fantastic opportunity, which I thoroughly enjoyed. I had been excited about the event for weeks, and my nerves only hit me just before I was about to present. In an attempt to break the ice and connect, I chose to be vulnerable and share that I was nervous and that this was my first public speaking event.
Most of you know that I have a YouTube channel and teach online DBT classes, and I’ve even done presentations, such as one at a DBT center in Berkeley, via Skype, where my image was projected onto a wall, but this was the first in real life presentation for me.
Camille Bates, who coordinated and sat with me upfront to moderate questions, was warm, kind, and expressed how important it is for new clinicians to be exposed to a different side of BPD than what they have seen up until now. It is important that my story and others like it, which bring hope and light to an otherwise often dark and scary diagnosis.
Mine is a story of hope, as many of you have been following this blog, who have read my books, who have seen the online documentary that I’m in (Border _), and perhaps you’ve even taken a class for me, very well know.
During the talk, I shared the overview of my journey, including the invalidating, abusive family environment that I experienced as a child and which likely contributed to my developing BPD. I talked about the feelings of abandonment and rejection that came up having been in twenty-six foster homes and two group homes. I talked about the difficulties I faced as an emotionally sensitive person, who had extreme difficulty managing when multiple stressors appeared in life it once, often leading to failed relationships, attempts to complete college, and the ability to maintain a job.
I talked about how in my late teens and into my 20s, I was in and out of inpatient psychiatric hospitalizations. I talked about how my psychiatrist chose to not indicate BPD on my electronic medical record because she was concerned, knowing that I frequently visited the emergency room for feeling out of control or having suicidal thoughts, that they would possibly treat me poorly due to the stigma associated with patients who have BPD.
I talked about how I had been in accurately diagnosed as bipolar rapid cycling and how this impacted the delay in me receiving the treatment that ultimately needed to get better: DBT.
So much more was discussed, the audience was very engaged, and I was able to answer a number of their questions. In a very moving moment, one of the students chose to disclose to her peers, that she herself has been diagnosed with BPD and had some questions for me. I won’t forget that moment.
I won’t forget how the faces in the audience soft and as I got more into my story. How they smiled warmly at me and nodded their heads to show support or agreement as I went on. I am so grateful that I was asked to speak at Santa Clara University, that I had the opportunity to meet this group of current and future therapists.  I am hopeful that I reached them with my story and that it will make a difference in the lives of those they work with in the future who have borderline personality disorder.
Thanks for reading.
More soon.
In kindness,
Debbie
P.S.  A big thank you to Daniela and John, too! 🙂
February 5, 2015/2 Comments/by Healing From BPD
https://www.my-borderline-personality-disorder.com/wp-content/uploads/2018/12/healing-from-bpd-e1577900769964.jpg 0 0 Healing From BPD https://www.my-borderline-personality-disorder.com/wp-content/uploads/2018/12/healing-from-bpd-e1577900769964.jpg Healing From BPD2015-02-05 22:08:002015-02-05 22:08:00Santa Clara University Event: BPD and Stigma (with Debbie Corso)
2 replies

How to Fill Out a DBT Pros and Cons WorksheetEmotional Vulnerability When You’re Under the Weather or in Physical ...
Scroll to top