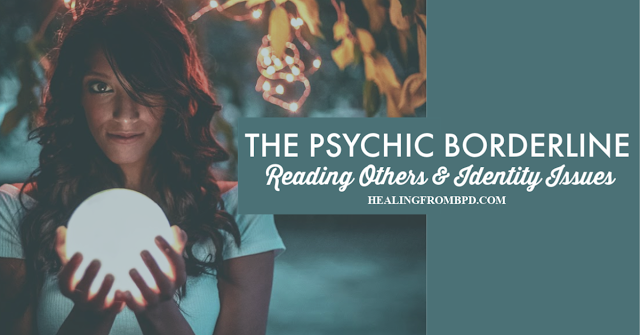 Ok. So I’m not *technically* psychic, but I, like many other people with Borderline Personality Disorder, BPD traits, or emotional sensitivity, have an interesting ability to “read” people.

My therapist has clarified that the ability to do this is actually a learned survival skill.

For those who can relate to what I’ll describe in this article, somehow, somewhere along the way, we may have unconsciously realized that if we could look a person over, effectively sum up what they are all about, and interact with them according to what we’ve read, we would be safe.

Our needs would get met.

Let me give you an example that supports this. My father was the type of person who could be loving and kind in one moment, but t if you said the wrong words or did the wrong actions — and you never knew what those were on any given day — he would, without warning, become very angry and sometimes even dangerously violent.

As a child, I subconsciously learned how to behave around my father in ways that would reduce my risk of being hurt by him. In essence, I learned to read him and then interact with and behave accordingly.  I’d choose my words and actions very carefully. I’d be watching his body language…his facial expressions, his tone of voice, the energy that he was giving off.

The “me” around my father behaved very differently from the “me” I was when I was with my teachers at school or even with my mother. I read them, and responded accordingly to them, too.

Evidently, this skill became somehow psychologically wired within me, and it wasn’t until I started DBT (Dialectical Behavior Therapy) that I began to see how this contributed to my lack of a strong sense of identity.

I was so frequently reading and responding to other people in ways I believed would cause them to accept and like me or not hurt me, that I never really developed my own unique sense of me.

I’d see glimpses of myself now and then, but if I thought I had an opinion about something then engaged in a conversation with someone whose acceptance, love, or approval I desired, and their opinion was different from mine, I instantly and willingly dropped any preference I had and quickly adopted their point of view.

The interesting thing is that I didn’t even mind. It was as if making that choice didn’t matter in terms of feeling like a self-sacrifice,  because in my mind it was necessary for my survival.

I truly had no sense of attachment to any idea or belief. I just wanted to be loved, accepted, and to feel safe. Those were my priorities, and they served me well as a child.

But, as an adult, they became a hindrance. Similar to Julia Robert’s character in the movie, “Runaway Bride,” I changed all the time to mirror the needs, likes, and desires of my partners over the years.

There is a scene in that movie where someone asks Julia’s character, “So, how do you like your eggs?”

Her answer changed — every time — to match that of her current boyfriend or fiancé.  There are other telltale signs that her character may be Borderline. Perhaps you can name a few if you’ve seen the movie.

The egg thing really spoke to me, though, at a time when I was struggling with my own sense of self. It was a bit of a “wake up” moment.
Still, for me, it wasn’t until I had a literal identity crisis, exhausted from trying to be everything to everyone that I realized I had no idea who I really was and that I really needed help.

This led to my BPD diagnosis back in 2010, though it was clear to me I’d been suffering from it for quite some time undiagnosed.

I am now in recovery from BPD and no longer meet the criteria for the diagnosis. I have a strong sense of identity and am aware when those mind-reading thoughts pop up and I challenge them.

I fact check and ask people questions. And, I am now the same me from situation to situation and person to person.

It *is* possible. You can learn more about my journey and what helped here.

If you notice that you’re making assumptions about what other people are thinking, feeling, or their intentions, consider whether you could be engaging in the distorted thinking style of mind reading.

While sometimes we’ll be accurate in our “readings” using our intuition, tapping into our past experiences, and being sensitive to such things, past trauma can sometimes cause us to see think we know what other people are thinking, feeling or intending and, because we’re seeing things through a trauma lens, we may be really off-base.

Check the facts and check in with yourself about any self-care you may be needing.

I hope this post has helped you in some way…whether you have BPD, love or care for someone who does, or if you are treating patients or clients with Borderline Personality Disorder.
Here’s that eggs scene with Julia Roberts:
Thanks for reading.

How DBT Has Been Helping Me | Dialectical Behavior Therapy for Borderline Personality...DBT Diary Cards | Why I Fill Them Out
Scroll to top