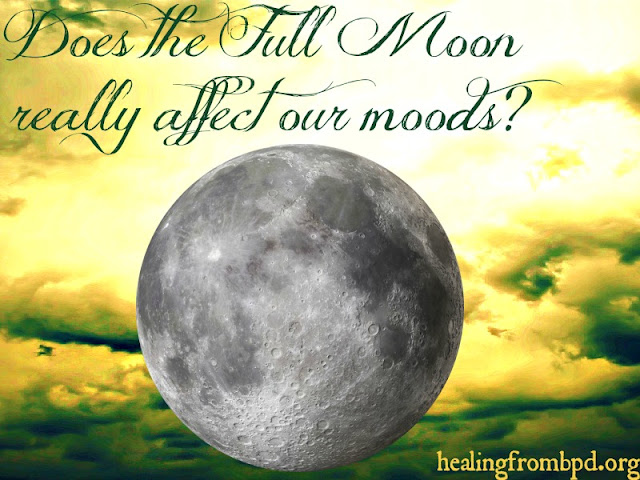 As someone with Borderline Personality Disorder who experiences intense emotions that often get dysregulated, I’m always interested in learning about possible causes or connections to shifts in mood. I’ll even go so far as to consider the urban legend that the full moon can cause strange things to happen here on earth.

If you had asked me a few years ago, “Does the moon affect our moods?” I would have replied with:

“Well, our bodies are made mostly of water, and the moon has an effect on the tides — so I imagine it must have an effect on us. I’ve heard that when we are directly under the moon, we weigh less. I’ve also heard that psychiatric emergency room nurses have confirmed that more people show up feeling psychotic or in distress on full moon nights.”
When my yoga teacher and I had this conversation the other day over lunch and she said that she has also had psychiatric nurses tell her that they experienced the surge in patients on full moon nights, I decided that I wanted to look for any evidence out there that this theory is true. Does the moon really affect our moods?
It was important for me to find credible sources for this research (and there weren’t many out there), so I started with this article by the well respected National Geographic News, which says:
“There is good reason to believe that people’s personalities do change around the time of the full moon, not because of any astronomical force, but because it creates the optimum lighting conditions for feeling carefree and mischievous.” — Psychiatrist Glenn Wilson
The article also says that it may be coincidental when people feel off or something odd happens and it also happens to be a full moon night. They then assign blame to the moon as the cause.  It also goes on to say that no studies have been conducted long enough to see if the correlation between mood shifts are elevated during the full phase of the moon.
But how do we, those of us who have personally experienced this phenomenon — those of us who have felt especially dysregulated, unaware of the full moon and only finding out after having our experience — know for sure that there isn’t a connection?
Do you believe there is a connection? Just because sufficient research hasn’t been done to prove or disprove a connection, does that simply mean there isn’t one?
Perhaps I want to hold onto the possibility of what may just be folklore, but I seem to consistently, personally notice a more intense shift in my mood during this time. I am open to the possibility that it is a coincidence, but I’d like to see more research done on this.
The Universe and the human body itself are very intricate, complex systems.  I wouldn’t be surprised to learn about an interconnection between the moon’s pull on earth’s atmosphere and our primarily water based bodies.
What is your perspective? Have you noticed an increase in emotional dysregulation in your self and others during the full moon? What do you make of it?
Thanks for reading.
More soon.
December 8, 2012/5 Comments/by Debbie (author)
https://www.my-borderline-personality-disorder.com/wp-content/uploads/2018/12/healing-from-bpd-e1577900769964.jpg 0 0 Debbie (author) https://www.my-borderline-personality-disorder.com/wp-content/uploads/2018/12/healing-from-bpd-e1577900769964.jpg Debbie (author)2012-12-08 17:35:002012-12-08 17:35:00Does The Moon Affect Our Moods? | Emotion Dysregulation
5 replies

Little Miss Passive Aggressive Showed Up Today | Dealing With The Difficult...Do You Deserve To Be Happy?
Scroll to top